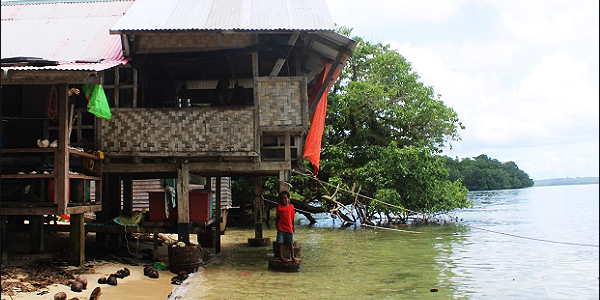 THE impacts of climate change have certainly done a lot of damage and changes in many of the low lying atolls islands in the Solomon Islands. Babanga Island in the Western province is no exception.

Unusual king tides, the weather pattern and the continuous sea level rise is a life threatening issue to the gilberts –(Micronesian race) who settled there.

Babanga is known for its lack of fresh water due to the contamination of their water sources and dug-out wells by salt water.

In an interview with Solomon Star Gizo, an elder from Babanga community, Wllian Torea, said the El Nino effects plus the unusual tides and the king tides have already taken away large portion of their land.

Mr Torea said people in Babanga Island are now only drink water from tanks, as well as using tank water for washing and sometimes bathing.

“Although there were many projects being set up here, purposely for the supplying of water tanks, the population is still increasing as families are expanding, so as the demand for clean water.”

He said not every family on the island has tanks. Therefore, it’s a difficult situation when it comes to the wellbeing for every household in the community.

“Our water sources have been contaminated with salt water. This is not like what’s in the past where we can drink and wash from the sources.

“When the tides are rising, the water even reaches the main street where people usually walk.

“This means some of the kitchens and houses that are built beside the shoreline are already full of water,’’ he added.

Wilfred Lee, a Bellona man married to a Babanga woman who lived on the island for over 20 years said, the impacts of sea level rise is now being experienced by almost both sides of the island.

Mr. Lee said the El Nino effect plus the unusual tides are the main destroyer that swept away many of the sands, that once make up the beautiful beaches of Babanga Island.

He said he is afraid that in 10 to 20 years’ time, the island will slowly sink.

He added within the next 5 years, water sources on the island that springs from the ground will turn into sea, and there will be no more extra water source for washing and bathing but people will rely much on tank waters.

It’s not only in Babanga island that is experiencing the effects of the climate change, many of the communities in around Gizo communities that lives at the coastal areas, other smaller islands in the Western waters, Nusabaruku community, Fishing village, Kongu are also in the same situation.

According to some reports, there are already some islands around the Gizo waters that have disappeared over the past years.

It is said that many of the rich habitats and biodiversity have now sunk with the islands, as it is now part of the historic tales of the sinking islands in the Western province.