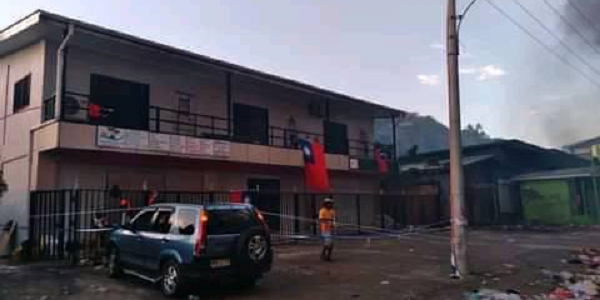 …. for sponsoring three-days of riots, looting, and destruction of Honiara

TAIWAN allegedly sponsored the three days of destructive rioting, looting and burning in Honiara last November, it was claimed yesterday.

Three people died in the burning that followed looting of Chinatown on Friday 26th November 2021.

Destruction of properties and businesses has punched a $534 million [about USD66 million] hole in the nation’s domestic economy, forcing intervention by some 200 foreign troops from Australia, Fiji, New Zealand and Papua New Guinea.

The Central Bank of Solomon Islands (CBSI) warned that it would take many years to fix the economy, saying the level of destruction simply exacerbated the nation’s worsening economic situation already struggling from the impact of the COVID-19 pandemic.

Now, a writer using the name of George Belau claims it was Taiwan that sponsored the riots of 24-26th November in Honiara.

“Taiwan’s involvement was clear immediately after the normalization of diplomatic relations between the People’s Republic of China and Solomon Islands.

“Taiwan’s action to cause havoc in Honiara was “premeditated and cold-blooded” and is an attempt sponsored by Taipei to pull down a democratically elected government in Honiara, according to George Belau, the writer of the article.

“The acts of violence directed against the democratically-elected government of Solomon Islands, the ethnic Chinese business community in Honiara and the majority of peace-loving Solomon islanders was at its very core a premeditated, cold-blooded and cowardly Taiwan-sponsored attempt to pull down the national government and undermine Solomon Islands-People’s Republic of China relations,” the article said.

“These actions, which resulted in the tragic loss of lives, destruction of livelihoods of innocent people and trashing of the Solomon Islands’ economy, clearly show Taiwan and its friends, the perpetrators of the riots are enemies of the entire Solomon Islands, not just of China.

“The provocative raising of the Taiwan-flag by Premier [Daniel] Suidani in Malaita on multiple occasions, the publication of the Auki communiqué (a blatantly anti-China document) and the unlawful detention of innocent ethnic Chinese individuals in Auki are but a few examples.

“These actions were then underscored by a two-year sustained smear campaign orchestrated by the Malaita for Democracy (M4D) against the National Government and China and designed to nurture the anti-China public sentiments: the results of which became clear in the late November Honiara riots,” the writer said.

Mr. Belau also claimed that Premier Suidani’s ‘unauthorized’ detour to the Chinese province of Taiwan in May 2021 was a “move to hatch plans together with Taiwan for the future riots/civilian coup.”

‘It is common knowledge, the Premier, upon his release from covid-19 quarantine immediately embarked on a recruitment campaign in Honiara and around Malaita to rally support to illegally obstruct the tabling of the motion of no confidence against him.

“Promises of money, a strong anti-China/anti-Government smear campaign, open incitement and active participation of Suidani’s government in recruiting and transporting supporters were critical to the success of their evil, undemocratic plan,” he said.

“The Aimela reconciliations for unity in early November were also just a ruse to recruit support for the impending riots, the writer said.

He questioned why the Opposition never issued a message of sympathy let alone apologize for what had happened in Honiara.

“Attended enthusiastically by Hon Mathew Wale, Hon Peter Kenilorea jnr and others in the national opposition, the true reflection of the intents of the event was the carnage brought on Honiara by the M4D and its leaders.

“In addition, it was no coincidence that a shop in China town adorned in Taiwanese flags was spared while all businesses to either side were looted and razed to the ground.

“The demeanor of the perpetrators of the riots and their leaders during the entire four-days of riots was also appalling. There was not one call for calm or peace from the Premier, Mathew Wale and Peter Kenilorea jnr.

“There was also never a message of sympathy to those who lost their businesses and livelihoods, including the ethnic Chinese business community. Never an apology to Guadalcanal province and its people, or the rest of the Solomon Islands. In fact for Premier Suidani, it was the exact opposite: he actually praised those acts of terrorism, an honorable act! ,” Mr. Belau said.

“Instead, the only calls [from the Opposition] were for the Prime Minister to step down, MPs to resign and direct threats to the government members’ properties and lives.

“Cunningly, the opposition attempted to shift attention from the true source of the riots – Taiwan incitement – to ‘structural root-cause’. As outlined earlier in this article, and stated emphatically by the members of the National Government during the motion of no confidence against the PM and later during the sine die motion, ‘the root-cause’ theorem is non-sense and a tasteless attempt at trivializing what is in truth a cold-blooded, calculated civilian coup-attempt,” he said.

Mr. Belau raised questions whether “Taiwan, the Malaita Premier, Celsius and other advisors, the M4D and the national opposition” represent Solomon Islands interest.

“Is Taiwan and the leaders mentioned truly fighting for your interest when none of them show empathy for innocent lives?

“Is Taiwan our true friend when in nearly forty years of so-called diplomatic relations, all we gained were a few solar lamps, some highly corrupt financial interventions and negligible trade and investment?

“Is it in Malaita and the whole of Solomon Islands’ interest to burn down Honiara, the only significant concentration of indigenous investment and capital accumulation?

“How does that help the aspirations for federalism or independence when the NPF counted on as a source of investment capital is threatened with the attempted burning of its investments and destruction of property?

“Where will the local private capital come from when the property market in Honiara is brought to its knees? Will the Australians, Taiwanese and Americans bring you the capital, something that never happened since forever?”

Mr. Belau said Solomon Islands should thank the PRC for taking the principled position to end the slush fund created by Taiwan in 2022.

“China is the only global power that has never invaded another country, never impose its values and systems on others, demonstrated the ability to cooperate with sworn enemies, not create new ones. China is the only power that represents development and not destruction. So Malaita and Solomon Islands, who do you desire as a friend?

“Certainly not Taiwan – most certainly not its agents and perpetrators of the riots. It is China for me and my people,” Mr. Belau said.