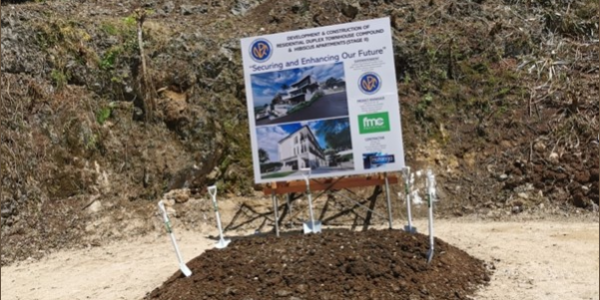 AUSTRALIA and the Solomon Islands National Provident Fund (SINPF) have marked the launch of a $120 million joint property investment with a ground-breaking ceremony in Honiara this week.

The project is probably Australia’s single largest economic investment in this country. The venture took 22 years to realise.

It stems from the destruction of a compound Australia was building for its High Commission staff on the hilltop just above the Savo Market in White River, West Honiara.

That compound however was destroyed during the June 2000 coup when armed militants took over the government then. When the Australian-led Regional Mission to Solomon Islands (RAMSI) arrived here in 2003, many Australian diplomats had to find lodgings in hotels.

Deputy Chair, David Rupoket, officiated at the ground-breaking ceremony on Thursday in his capacity as acting Chair of the Solomon Islands National Provident Fund (SINPF).
Mr. Rupoket represents employees on the SINPF Board. The chair and SPM, Jimmy Rodgers, was not in attendance. There was no explanation for his absence.

As many as five of the seven-member Board did not show up.

The Australian High Commission was represented as was the Governor of the Central Bank of Solomon Islands (CBSI) Luke Forau.

The ground breaking ceremony was the 2nd phase of the Australian Department of Foreign Affairs and Trade (DFAT) Townhouses and the Hibiscus Apartments project, located just next to King Solomon hotel.

Staff of the Australian Government will live in the Apartments being custom-built to their specific needs and requirements.

Hatanga, a locally-owned Real Estate Construction firm, has been contracted to build the Apartments under the watchful eye of FMC Pacific (SI) as the Project Manager.