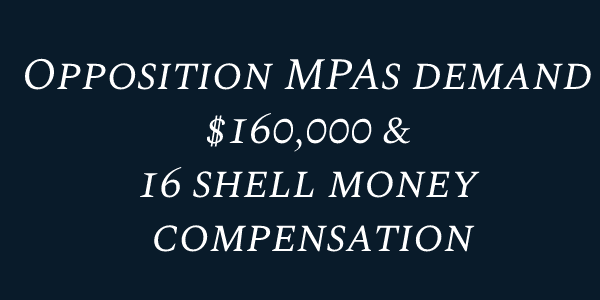 THE Opposition Group who recently called for a reconciliation with the Daniel Suidani led MARA government are now demanding a compensation payment worth $160,000 and 16 shell money in a twist that baffles the Malaita Provincial Government (MPG).

Information reaching Solomon Star Auki claimed that the opposition group is seeking compensation which will be shared among 16 MPAs on the opposition side.

This means each MPA will receive $10,000 each with one shell money.

The compensation claim was related to a failed motion of no confidence last September which was withdrawn at the last minute due to pressure from the public.

The opposition group claimed they were insulted by the Malaita public which they believed is the work of the MARA government that resulted in those insults being at the receiving end of it.

The opposition group also claimed that they were intimidated and were under threat leading up to the motion of no confidence day.

Information gathered stated the leader of the opposition group has been in contact with the Deputy Provincial Secretary recently discussing their compensation claims.

When the Solomon Star contacted the spokesperson for the non-executive group yesterday about the demand, MPA for Ward 15 Edward Misite’e did not reply a text message sent to him.

This paper also called his cell phone, but he did not answer.

However, it was revealed that without compensation, the opposition group will not be attending the Full Assembly meeting this month.

Information gathered shows that the opposition MPAs are not together with the compensation demand, as some are calling for reconciliation while others are after compensation.

The Premier said he is aware of the compensation claim after being informed by the Deputy Provincial Secretary.

He did not give further comment on the issue but said there is a need to get down to the bottom of the issue before responding to the claim.

Solomon Star Auki understands that if the opposition MPAs fail to attend the Full Assembly meeting this month, this will be the second meeting they boycott since the failed motion of no confidence last September.