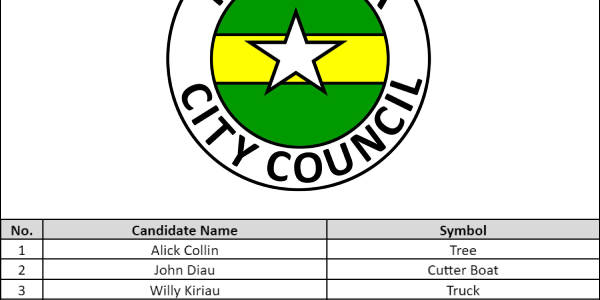 Returning Officer, Fred Jones Warereau confirmed the validity of these nominations before a ballot paper draw was done to determine each candidate’s position on the ballot paper by 5pm on the closing date.

“Each candidate has until 11 May 2022 to notify the Returning Officer in writing any decision of withdrawal of their candidacy “, Mr Warereau Said.

The following is the list of candidates according to order of ballot paper draw conducted at the close of nomination today;

Candidates have been briefed to be aware of all campaign requirements and pivotal of which is to adhere to our covid health measures.

Voters from Vuhokesa Ward 6 will go to the poll to elect their new Councilor on Wednesday, 25 May 2022.
– HCC Media