A LONG WAIT FOR FAMILY 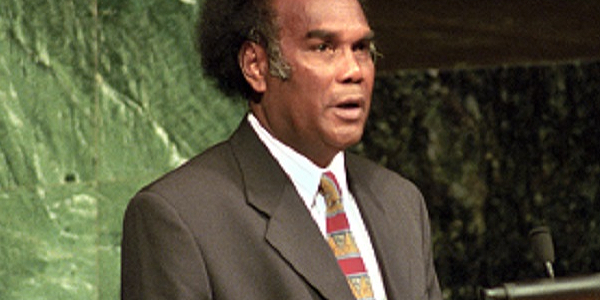 Government sits on title transfer for decade & half

BEFORE he died in 2007 the Coalition government which he helped put together reportedly agreed to ‘gift’ him a package which includes a house, a vehicle and $1.5 million in recognition of his contributions to nation-building.

“It was a deal hammered out when the new Coalition government was formed,” his son, Bartholomew Dai told Solomon Star Thursday.

But 14 years on, the late Bartholomew Ulufa’alu’s sons are still waiting. They are waiting for the transfer of the title of the beach-front government quarters at Tandai, West Honiara.

The High Court granted the Letters of Administration to the late Ulufa’alu’s three sons – Bartholomew Dai, Aba’au Ulufa’alu Jnr and Richard Noliwalu to jointly administer the estate otherwise known as Quarter 117 Parcel No. 191-006-062.

Bartholomew Dai – the eldest spoke to Solomon Star about the family’s frustrations over the years.

“Look, we have all the documents here. There are two letters on the matter from Prime Minister Manasseh Sogavare when he was an ordinary Member of Parliament back in January 2008,” he said.

The Solomon Star has obtained copies of the letters. The first was addressed to Dr. Derek Sikua who succeeded Mr. Sogavare as Prime Minister at the time.

“There was an understanding under the former GCC Government, which has yet to be formalized by Cabinet to gift the government quarter allocated to the family of the late Bartholomew Ulufa’alu in recognition of the late former prime minister’s outstanding contribution to the development of our country in various capacities.

“This is a noble gesture, which I am sure ordinary Solomon Islanders would support,” the letter dated 10th January 2008, said.

“The quarter is still being occupied by the family of the late Bartholomew Ulufa’alu and they are anxious to know your government’s position on the matter,” the letter said.

“We briefly discussed the matter of housing benefit to former Prime Ministers in reference to the case of the late Honorable Bartholomew Ulufa’alu.

“I attach a copy of my letter to then Prime Minister of the CNURA Government in respect of a decision which my government made to gift the government quarter referred to in my letter to the family in recognition of the late former Prime Minister’s outstanding contribution to the development of our country,” Mr. Sogavare said in the letter in his capacity as an Ordinary MP at the time.

“The decision has yet to be formalised by the government. I gathered from our discussions that such formalization would be possible under the proposed Former Prime Minister’s Pension Scheme which I understand would be done under the PER.

“In the meantime I would suggest that the family will have to be assured of that arrangement so that no other interests in respect of the quarter should be entertained by the government,” Mr. Sogavare said.

He said he had raised the concern because a Member of Parliament was intending to sell the quarter to a private concern.

Mr. Dai also produced another letter, purportedly written by Tione Bugotu, who at the time was the Permanent Secretary of the Ministry of Lands, Housing and Survey.

Mr. Bugotu wrote a “TO WHOM IT MAY CONCERN” letter titled, Re: Allocation of Q117 PMO Housing Pool to Family of the late Hon Bartholomew Ulufa’alu in 2007.

“This serves to confirm that to the best of my knowledge, I was fully aware (of) and familiar with the issue pertaining to the above underlined subject matter.

“In 2007/2008 I was the Permanent Secretary of the Ministry of Lands, Housing and Survey during the term of office of the then Prime Minister Hon Manasseh Sogavare. My Minister at the time was the Hon Rev Leslie Boseto,” Mr. Bugotu said.

“I recalled that sometime toward the second half 2007 I was called in by my Minister and informed of correspondence received from Prime Minister and Cabinet Office advising that as a token of appreciation from the Government, approval has been given at the discretion of PM and by Cabinet to allocate Quarter 117 (Parcel No. 192-006-062 under PM’s Housing Pool to the family of the late Hon Bartholomew Ulufa’alu.

“This was noted and the Ministry was also notified accordingly for which correspondence to this effect was placed on file,” the letter said.

Mr. Bugotu could not be contacted to independently verify that he was the author of the letter, which carried no official letterhead.

In an interview yesterday, Mr. Dai told Solomon Star that it appeared the family had been given a run around.

“Each time we contact the Office of the Prime Minister to discuss the matter, we were given new excuses. It is possible that officials are doing this without the knowledge of Prime Minister Sogavare.

“After all, it was his government that approved the gifting of the property. What remains is the transfer of the title to us as joint administrators. It has taken 14 long years and we are still waiting,” Mr. Dai said.

“Our plea to the Prime Minister is, please complete what your government has started.”