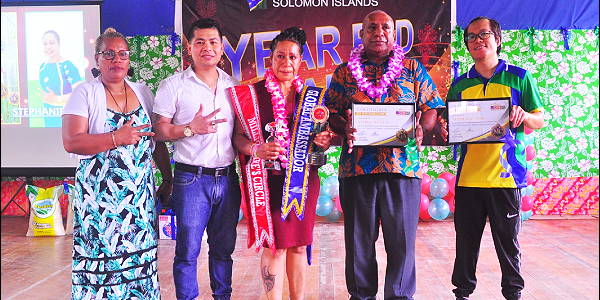 The Alliance In Motion (AIM) Global Solomon Islands (SI) Branch has awarded its first ever Millionaires Club Awardee over the weekend.

The ceremony was held on Saturday 18th at the National Auditorium, Point Cruz in Honiara.

Ms. Ting has been recognized as the country’s first ever Global Ambassador and now she is part of the Philippines Millionaires Club.

Also she thanked AIM Global Board of Director’s for giving the SI team the opportunity and been recognized in the business.

She highlighted a lot of people did not believe in the AIM Global business.

However, she stated; “it is real.”

She stated in 2014 she was ill because of a fibroid growing in her uterus.

With her illness she traveled overseas and done two surgeries in Malaysia.

However, after her second surgery she told her doctor that she cannot go through another operation.

From there her doctor encouraged her to follow nature’s way!

Hearing that from her doctor, Ms. Ting google up the word ‘Nature’s Way’ and came across AIM Global products.

She then seeks assistance from a Filipino living in the country and that person gave her the AIM Global product C24/7.

“After taking two boxes of the C24/7 I started to feel okay and feel different. I then went back to see my doctor and was surprised to hear that my operation was picking up well and is looking good and now I am a normal person,” Ms. Ting said.

Thus, she stated from that she joined the business AIM Global because health is a key to be successful in life.

“Joining this business is not easy. You have to sweat in order to be successful. You cannot just sleep and stay at home and expect a miracle to happen.

“You must work hard and follow the AIM Global marketing strategy rules and you will be successful,” Ting said.

“PNG people are very proud of what AIM Global can do. As you can see people have embraced the program of AIM global,” Mr. Kaul said.

He added this is because people have seen the benefits as a member of the organization.

He stated these benefits came under two reasons; one is on the well-being of families who are members of the organization.

“Secondly, the most important is towards our health. I agree with the recipients when our health is good other things in life will be good as well,” Mr. Kaul said.

He added because there is no other way to be successful but to work hard.