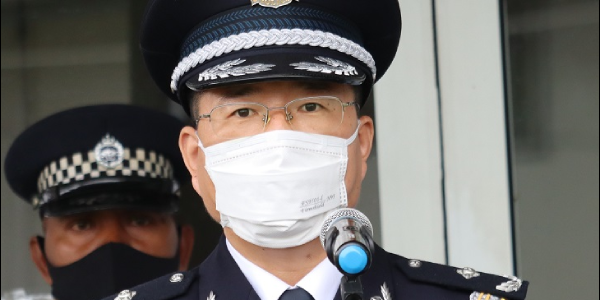 Solomon Star: What is the intention of China sending Police Liaison Team to Solomon Islands?

ZHANG: Last November, social unrest occurred in Solomon Islands, we learned that although RSIPF made much efforts to control the situation, but due to lack of police equipment and operational capability, the situation was out of control.

Shops in Chinatown suffered from looting and burning, which severely affected Chinese citizens’ daily lives. At the request of the Solomon Islands government, the Ministry of Public Security of China dispatched the Police Liaison Team comprising 9 experts to the Solomon Islands. We will support RSIPF through providing equipment and training, help RSIPF to strengthen capacity building, promote public order management and riot control, maintain social stability, protect the life and property of local and foreign friends in Solomon Islands.

Solomon Star: What is the work plan of China Police Liaison Team during your stay in Solomon Islands?

ZHANG: Upon arrival in Solomon Islands, China Police Liaison team was informed that many police officers had been infected and quarantined during the epidemic and the daily operation was severely affected. My team was concerned about RSIPF colleagues’ health deeply and donated the epidemic prevention materials originally planned for our own use to RSIPF for emergency use. Subsequently, the Ministry of Public Security of China purchased 20,000 RTKs, which were transported to Honiara by Chinese aircraft and handed over to RSIPF on 18 February.

At the same time, the team will also actively promote the implementation of three policing projects in aid, namely the Digital Mobile Radio Communication System for Honiara, the Forensic Autopsy Laboratory and the “I-24/7” Interpol Communication System, to strengthen communications security, criminal investigation and investigation cooperation of RSIPF, and to promote the modern and international level of RSIPF’s law enforcement capability.

Solomon Star: Why China Police Liaison Team will provide security training to the Chinese citizens in Solomon Islands? What kind of training is being planned?

In recent years, criminal cases against Chinese citizens in Solomon Islands involving property and personal safety have increased. Especially during the social unrest last year, the Chinese community members suffered serious damages. They asked both countries’ governments and the Chinese embassy for assistance and requested security guidance and emergency training. To assist in the China embassy’s response to the reasonable needs of the Chinese community, according to international practice, China Police Liaison Team will share with them common legal knowledge, case reporting procedures, the disposal process, burglary prevention, robbery prevention, fire prevention and so on, mainly focusing on emergency response and self-protection measures, so as to improve their ability to protect their own security in accordance with the Solomon Islands law.

These measures are not only conducive to the safety of Chinese communities in Solomon Islands, but also fully comply with the Solomon Islands law. It can also contribute to social security and stability in Solomon Islands. Many other countries have adopted such measures to protect their citizens abroad. RSIPF prioritized the security and safety guidance of Chinese Community members.AC Simpson Pogeava, AC Patricia Leta and PPC Jimson Robo attended the awareness and training program held in Chinese Embassy on 2nd March, and gave a lot of valuable and professional instructions and suggestions which were appreciated by the participants.

Solomon Star: Is China’s police cooperation competitive with other countries?

ZHANG: Of course not. Bilateral cooperation between China and Solomon Islands is based on equality and mutual trust and follows the principle of non-interference in each other’s internal affairs, which serves the common interests of the two countries’ people as well as the citizens of all countries in Solomon Islands. In recent years, China has carried out effective police cooperation with Papua New Guinea, Fiji, Vanuatu, Samoa and other Pacific Island nations by providing police aid, carrying out police experience and technology exchange, combating transnational crime.

We work together to maintain security and stability of regional environment and have been welcomed by the region. Police cooperation between China and Australia has also been fruitful. Recently, the Ministry of Public Security of China awarded the Great Wall Commemorative Medal to Australian Federal Police Officer Kelly Foster in recognition of her heroic action to save Chinese citizens at the loss of her own life. China Police Liaison Team will uphold the spirit of “transparency, inclusiveness, professionalism, high-efficiency” for the purpose of friendship and goodwill, respect Solomon Islands government and people, and maintain close and stable police cooperation between China and Solomon Islands. It does not target any third party or move anyone’s “cheese”. Instead, it is committed to making the “cake” bigger to protect everyone. China sincerely hopes to work with other countries to support the capacity building of RSIPF and maintain the security and stability of the Solomon Islanders.

ZHANG: Of course not. After the riots broke out in Solomon Islands, several countries sent assisting army and police to help RSIPF restore order. At the request of the Solomon Islands government, the Ministry of Public Security of China joined hands with other countries to help the RSIPF maintain social order by providing police equipment and dispatching police liaison team. Since the arrival in Solomon Islands, China Police Liaison Team has been warmly welcomed by RSIPF and people from all sectors of society. Both sides look forward to the prospect of future cooperation. Neither China’s will nor Solomon Islands’ reality has the potential to intensify tensions. It will only enable the Solomon Islanders to enjoy a more peaceful, harmonious and secure social environment. As Chinese President Xi Jinping pointed out, “One does not know whether his shoes fit until he is wearing them.”

The Solomon Islands government and people are in best position to judge whether the police cooperation between the two countries is beneficial. We are ready to work with our police colleagues of RSIPF to build a community with a shared future for mankind, and make Solomon Islands truly an island of security, happiness and prosperity.