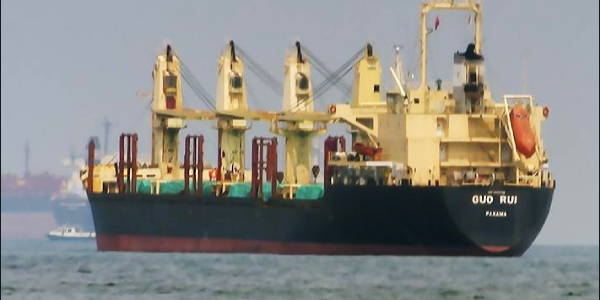 Is Guo Rui (pictured) the culprit in the controversial arms shipment?

SINCE Solomon Star broke the story that a log ship has slipped into Honiara with a deadly cargo of arms without clearing Customs, newshounds (reporters) have been on their toes to identify the ship.

Their efforts thus far have been futile and rather frustrating.

This is because Customs and Quarantine officials who have details simply refused to talk for fear of reprisal. Few details of the ship have been released over the past two weeks but the name.

Solomon Star can now reveal the name of the vessel, where its voyage originated since January, how long it took to get to Solomon Islands and when it finally arrived in Honiara.

The log ship suspected of bringing the four large wooden crates containing the deadly cargo is the Guo Rui, a Panamanian-registered bulk carrier.

Information obtained by Solomon Star shows the GUO RUI left the eastern port of ZHANGJIAGANG, China at 12:52 on 30th January 2022. It arrived in the Solomon Waters at 05:56 on 15th March.

Voyage CN ZJG sailed just east of Papua New Guinea and into Solomon Islands. The ship, however did no clear Customs. Instead, it went straight to a log pond where it offloaded its controversial cargo.

Just in case you might be wondering where is the ship?

Solomon Star has established that the ship was still in the Solomon Sea as of 5:30pm yesterday.

Where is this vessel going to?

While the vessel is not physically at port in HONIARA, it is giving false information that it was at ANCH in Honiara after a voyage of 1 month, 13 days originating from port ZHANGJIAGANG, China.

One of the questions being asked is why Customs and police have failed to apprehend the boat for breaching security by not clearing Customs before traveling to a log pond where it offloaded the four crates of unspecified weapons.