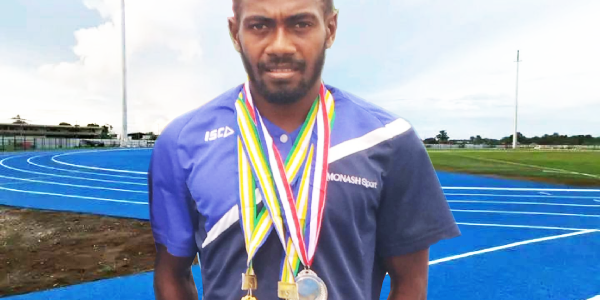 HE is one of the lads despised by villagers because of his daily involvement in anti-social behaviour, the illegal brewing of kwaso, drunkenness, burglary and disturbances within his village.

This lad also has scars on his body as proof of his once “rambo-style” nature.

He is 18-year-old Leeroy Alulu.

In his village at Loina, North Malaita, if you mention his name to villagers they will immediately describe to you Leeroy’s notorious lifestyle.

To his family and villagers, Leeroy is a headache.

However, for Leeroy he thought engaging in such anti-social behaviour is the way to live life. To him, the illegal activities he involved in at the village level will not affect his future.

He was a good football player then so he used to play football with other boys each evening orwhen there are competitions taking place because football is one of mainsports in that region.

It was when there were no sporting activities or classes during his time in the village that he finds himself on the beach laying down under the trees and roaming the village to cause problem for villagers.

He was the ring leader for the teenage group in Loina and often referred to as a “bad and naughty” boy.

But as time passes, Leeroy begins to realise that such behaviour and involvement in anti-social behaviours leads to nothing but a bleak future.

It dawns on him that he has to make a change and so when the opportunity came for him to relocate to Honiara to continue his education, his journey to transformation began.

He arrived in Honiara in 2020 and attended Panatina Community High School (PCHS) in East Honiara.

In Honiara he lives with his uncle Ishmael Alulu, who always encourages him to be serious in his education and personal life.

Apart from school, Leeroy also started engaging in athletics – a new sport for him – because as a village lad, he never took serious attention in athletics.

His personal journey to fame started as he takes athletics seriously, thanks to his aunt and country’s long distance queen Sharon Firisua and long distance runner SiosiOsifelo.

He recalled that back in the village, he could stay up all night until day break when under the influence of kwaso.

But through his uncle’s tough discipline in Honiara, he has changed.

Part of this change is taking his studies seriously and at the same time committed to his daily athletics training programs.

Leeory will be in Form Five this year at PCHS.

“Since moving to Honiara and started joining athletics, it was hard at first because it means waking up at 4am to do running practice every morning,” he said.

“I often see my cousins drinking along the road and shouting at me.”

This was a totally different routine to his life in the village.

“Remembering well all my days in the village was never the same again as
I move to Honiara in 2020.

“I have been called the number one unwantedyouth in my own village and other communities.

“I brew kwaso (home-brewed beer), I drink kwaso nearly every day. Fewtimes I took my cousins to do break-ins.

“My head, my legs have scars from injuries for involving in fight withother youths during my drunkard life,” he said.

He nearly gave up in his training because of many challenges he faced in Honiara, but through ongoing support from his uncle and coaches he has achieved his dream to be a top runner.

“Sometimes I nearly give up. But through my aunty Sharon Firisua and Siosi Rosifelo I was encouraged to do my training every day,” he said.

And it paid off when his potential was slowly recognized.

He had joined a number of past competitions in 2021, such as the athletics championships and school carnival in Honiara representing his school.

Back then he was just an ordinary runner and failed to win any medals.

But he never gives up and because of his perseverance to achieve best results, after a year of training it paid off, adding, life is now different and he feels much better.

“I never give up on my trainings. Now I have spent one year of dedicated training. I feel I’m a different person altogether.

“I love my daily trainings and always want to learn from my seniors and coach,” he said.

Because of his commitment, he was selected to be part of Team Malaita during the recent national athletics championship at King George Sixth School running tracks in East Honiara.

And had he proved himself as one of the top runners to watch in the upcoming Mini-Games in few weeks time in Northern Marianas and next year’s Pacific Games in Honiara.

He blamed a blister to his legs as the reason for snatching silver in the 10, 000 metres.

But it was a proud moment for him having to snatch three medals.

He said winning medals in the recent championship has encouraged him to practice harder and achieve his dream to be one of the country’s top runner.

“For the recent national championship, competing with our national athletics is big challenge but when you start to win them.

“You start to feel strong which encourages me to do even more for your next competitions to come,” he said.

Leeroy said practicing and running on a grass turf and then switch to running on a synthetic running track built by China is a challenging.

“Still very tough to use the new turf.”

But he is glad the new running track would help to boost the country’s preparation for the upcoming sports competition.

For now, training will continue and he looks forward to the mini-games in Northern Marianas in June and 2023 Pacific Games here next year.

His uncle Ishmael also congratulated Leeroy and other athletes for their recent achievement.

“Leeroy after your bad boy days in the village you’ll be our next star to watch out for.

“All the best in the upcoming mini-games and Pacific Games,” he said.

Sharon also congratulated Leeroy and other runners from Team Malaita who won medals.

She also thanked their head coach Naoyuki Fujiyama for his great support in nurturing the young athletes.

Sharon said, this is a beginning of a new chapter for this young boy to keep him busy in sports.

”Today is just a beginning of your career. Still more to come in this sport but you have to prove to me good results.”

Firisua and Fujiyama led Team Malaita to victory during the three day athletics champion from Thursday 19th, to Saturday 21st May.

Team Malaita was crowned the overall champ by snatching a total of 28 medals.

These included; 14 gold medals, 7 silver and 7 bronze including the overall trophy.

As Leeroy continues with his preparation, lets wish him well and others in their preparation for two of the upcoming competitions.