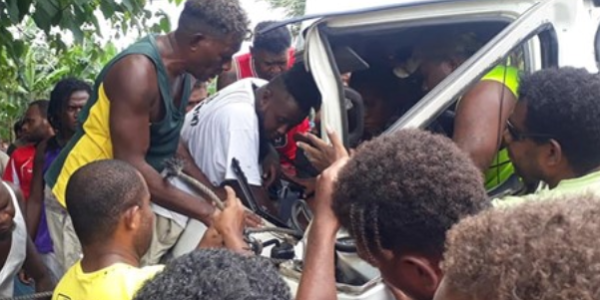 A PUBLIC bus has landed at the bottom of a tree at Kombito 3 in east Honiara yesterday, injuring one female passenger, after it experienced a mechanical problem.

The bus appeared to have smashed against a forest tree.

According to a bystander, Clifford Tom, the bus had people on board when it ran off the road while waiting for an oncoming vehicle to pass.

Mr Tom told Solomon Star, the bus driver and his conductor escaped from the scene, shortly after the crash.

“One passenger was injured, and was transported by an ambulance to the Referral Hospital.

The Police was later called to investigate the accident.

However, Tom calls on responsible authorities to ensure to check on all buses are roadworthy before providing services to people.

“Authorities need to do frequent checks on buses that are providing services to people, especially those in the back roads or communities in the outskirts of Honiara.

“Most of these bus drivers are too young to drive. The authorities need to step up,” Mr Tom added.

According to Mr Tom, the bus will no longer be able to get back on the road as the accident has caused major damages to its original form.

It is unclear whether the bus driver was recalled to assist the Police with their investigation.