But Phil Bradford is determined to start all over again 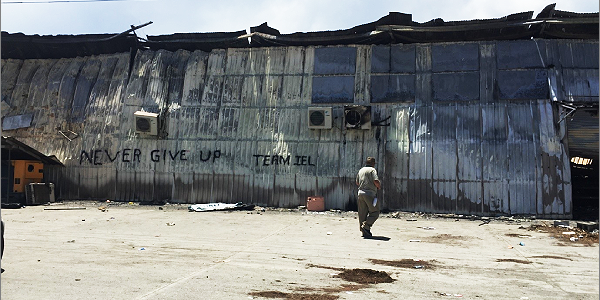 In the afternoon of Thursday 25th November Phil Bradford the owner and Chief Executive Officer (CEO) of Island Enterprises Limited (IEL) received a phone call from his daughter.

“What do you mean?” he asked, and Jess told him about the fire burning Island Enterprises retail complex at Ranadi.

The company’s complex was one of many that were looted and burnt on Thursday after what was supposed to be a peaceful protest for the Prime Minister to step down on Wednesday turned violent.

On Wednesday when news of the day’s situation reached Jess she organised staff to be dropped off at 4pm using the alternate route through Panatina.

Phil said he never thought that the situation would escalate to Ranadi.

But the violent situation intensified into Wednesday night and worsened on Thursday as protestors loot and burnt businesses from Chinatown to Ranadi.

Business losses from the uprising – the third in Honiara in a decade – have run into millions of dollars and the figure is climbing.

According to Phil, his loss from the building itself is estimated to be around $20million but this figure did not include the stock that was looted and those that burnt with the building.

In fact what burnt down on Thursday was 41 years of progressive and successive development of Island Enterprises.

“That was the site I started Island Enterprises.

“There was just me and two other Malaitan men and we used a second-hand car,” Phil recalled.

At that time it was just a small space.

Today Island Enterprises employs 150 Solomon Islanders, four expats and has trained thousands of people, many of whom are now highly certified in their respective fields of employment.

The company also branched out with subsidiaries in engineering, trade and manufacturing.

Jess is now the Managing Director.

She joined the family-owned and operated company in 2010 and according to her, the company and its employees have played a vital role to development in Solomon Islands.

Therefore, she said at this point in time, they would not be letting staff go.

“We will maintain our current staff,” she said.

“We will rebuild,” Phil added.

At 73-years-old Phil said it would be like starting all over again and he is determined to do it.

To show his determination, on Saturday afternoon Phil went and spray-painted the message NEVER GIVE UP TEAM IEL on the burnt out remnants of his 41 years of hard work.

In the meantime, Jess said the plan now is to find a small retail space and continue with business when the company’s new shipment of stock arrives.

The escalated violence on Wednesday and Thursday has forced Prime Minister Manasseh Sogavare to seek assistance from Australia and Papua New Guinea to send security personnel to Honiara to assist the Royal Solomon Islands Police Force.

Both countries have responded and since the arrival of the Australian and PNG troops the situation is being contained.