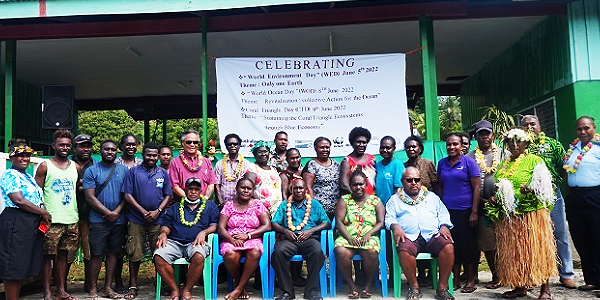 GIVEN the fragility of our environment, its important for the country to look after and care for our eco-system.

That’s according to the Western Provincial Minister for Environment and Climate Change Isaac Jenty.

He was speaking during the event marking the Coral Triangle Day (CTD) and the World Ocean Day (WOD) on Thursday at the Netball Stadium in Gizo, Western Province.

“The fact that we have designated days to celebrate these very important environmental events is in itself a recognition of the fragility of the planet in which we inhabit and as much a reminder to all of us of the importance and looking after and caring for our environment,” he said.

He said, this year’s world environment day commemoration is a significant one in that 2022 marks 50 years since the first in international meeting on the environment in 1972- the United Nations Conference on the Human Environment (The Stockhold Conference () during which idea if designating a particular days as World Environment Day was formalized.

“That conference also first put sustainable development in the global agenda and was the catalyst for the information of environment ministries and agencies around the world and paved for a whole new global agreement to collectively protect the environment.

“In fact it was also where the goals of poverty alleviation and environment al protection become inter-connected, eventuating in the Sustainable Development Goals that we now have,” Minister Jenty said.

He said, such event it is an opportunity for everyone to raise awareness, encourage and provide action for actions and interventions against threats to our natural world and climate.

“In our context we are already actually living it. Climate change, global warning, sea level rose and whatever terminology we use is not something in the future or something we are anticipating or will happen in the next 100 years,” he added.

Minister Jenty explained just to put things into perspective according to a press release by the World Meteorology Organization published last month.

“It is yet another sure indication that human activities are causing planetary scale change on land, ocean and in the atmosphere and these are often have long lasting effects on sustainable development and our ecosystems according the world,” Jenty added.