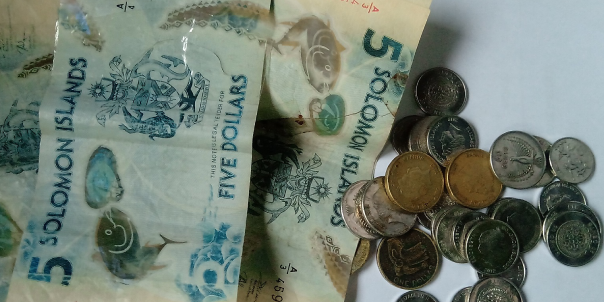 GIZO: CASH circulation in any economy of a country is very important to keep businesses and trading activities going.

In the country its important to allow our people to engage in economic activities and earn cash to help sustain their lives and improve their standard of living.

However, the higher rate of cash circulation always concentrates in the urban centres like Honiara and provincial centres where most business activities and trade are happening daily as compared to our rural and isolated communities and regions.

Close to eighty percent (80%) of our people are rural based and struggled to strive financially, earn an income and engage in economic activities remains a hurdle.

But one of the issues, our people often face is limited availability of cash especially coins and lower dollar notes like $5 and $10.

Because of that rural canteen owners and market vendors who need them to use as change during any business transaction are having problems accessing coins and these two particular notes.

Its a long time problem for many our rural and isolated regions where very little business activities are going in.

For many of the isolated provinces and islands like Temotu, Malaita Outer Islands, Renbel, Shortlands and others, this is no exception.

In the Western Province, this is had been a problem for so long and remains a challenge.

In the past months during my trips to some of the islands like Choiseul, Wagina, Kolombangara, Ranoggah and Vella, I realised its an issue facing our struggling rural dwellers.

So often urban dwellers traveling into the villages do carry with them large amount of cash but most especially $20, $50 and $100 dollar notes.

So when a purchase is being made using these bigger cash notes, a market vendor is always faced with a problem to look for a change to give back to the customers.

At the village, cash transaction normally happens at a canteen, the markets and if theres a school nearby, during break times students buy things like drinks and cakes.

In the end most times these coins and notes ended up at the village canteens or trade stores.

And then the shop owners would bring these coins and notes to their nearest urban centres like Gizo, Noro, Munda, Seghe, Taro and others to buy their cargoes from the Chinese owned shops as well as some locally operated shops.

I was at a shop in Gizo Monday early last week and a shop owner from a nearby island who arrived that morning brought with him more than $200 in coins.

The Chinese shop gladly received the coins in exchange for coins after the local shop owner requested to let go of the coins.

In the village during Sabbaths and Sundays, the congregation often put their offerings.

But after worship each evening, I’m told some of the shop owners would quickly visit the treasurer to exchange higher vale notes with the coins to use as change at their canteens.

Because of these situations, it had led to shortage of coins and the $5 and $10 notes from circulating in the villages and communities.

There are people who before heading off to the village would change their $100 dollar notes into coins, $5 and $10 notes knowing the situation they will face when they arrive in the village.

During my recent trips to Kolombangara and Ranoggah, I have also faced with the similar problem when going to the markets.

When I handed over $50, the mothers were struggling to return the change on time.

This is also when purchasing fuel and paying someone for doing a job.

In Ranoggah more than a week ago, I had an encounter where a canteen had a shortage coins and notes to give back as change.

And it is causing so much inconvenient to the vendor and a customer.

While in Ranoggah I also experienced shortage of coins and the lower cash notes after making a number of payments.

Its an issue where a lot of our rural dwellers have been faced with every now and again.

And its likely not going to be resolved very soon.

The long term solution is to allow our rural communities to engage in more business activities.

Not only that but for our rural communities to open up their land and resources to engage in more income generating activities like fisheries and agriculture.

To ensure economies activities can start, government through the Members of Parliament (MP) need to have a vision to invest in infrastructure development first such as wharves, roads, access to good water and electricity.

By having these vital infrastructures on the ground, investors can move in to do business on that particular island and province.

This is much faster and convenient.

So if you planning your next visit to a rural area, its important to prepare coins and smaller notes because it may become handy when doing financial transaction.