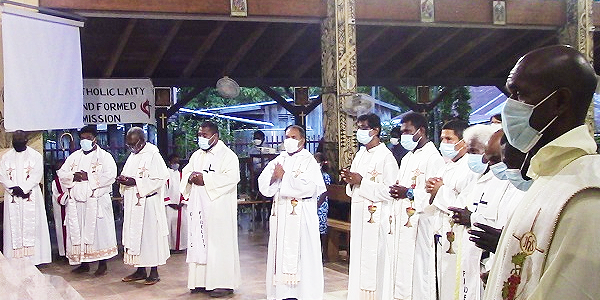 PARISH priests from the Catholic Diocese of Gizo met last month in Gizo to prepare for the universal church synod which will be held in Rome next year.

Catholic Diocese of Gizo media officer Rellysdom Malakana said the meeting was initiated after the Holy Father strongly recommended the need for the church to prepare for the universal church synod during the recent Episcopal Conference for Papua New Guinea and Solomon Islands.

Mr Malakana said as part of that preparation the parish priests made presentations on reports from their respective parishes and analyzed the work of the church within the Diocese of Gizo as they listened to each parish report.

A total of 12 parish priests from eight parishes within the Catholic Diocese of Gizo attended the meeting which was held at Bethania, Gizo on March 4th 2022.

The theme of the meeting was “Communion, Participation, Mission”.

Mr Malakana said the theme is now adopted by the Diocese to enlighten God’s people through His words in prayer and also to enable “everyone to follow the path to which God calls us – deeper communion, fuller participation and greater openness to fulfilling the mission in the world”.

The Catholic Diocese of Gizo covered Choiseul Province, Shortland Islands and Noro in the Western Province.

Mr Malakana said the meeting concluded with a Chrism Mass (the blessing of holy anointing and consecrated oil) which was also attended by parishioners in Gizo.