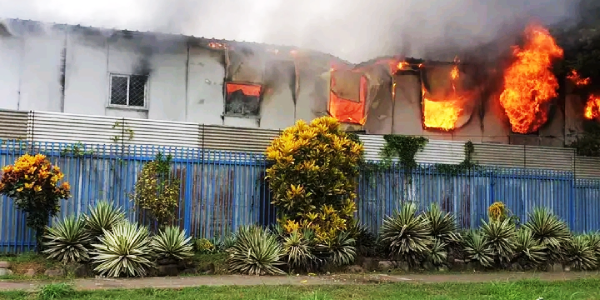 A building near the FOPA Village at Panatina, that housed China Civil Engineering Construction Corporation (CCECC) workers has caught fire around 2pm, Wednesday.

It was suspected that the fire might have been caused by a leaking gas.

A security officer interviewed on site said, the fire started at the kitchen but could not confirm if it was anyone’s fault.

“The fire first started at the building’s kitchen.

“It is highly suspicious that the cause must be from a leaked gas at the kitchen. It’s because there was a loud blast coming from the kitchen,” the officer said.

He added, attempts by fire fighters to save the building from further burning were unfortunate.

“Even when the fire fighters arrived at the site, the building was already collapsed.

“The only things that were saved were some CCECC tools and materials,” the officer told Solomon Star.

Meanwhile, the security officer who witnessed the incident said that there is no suspicion of foul play involved.

But it is believed that Police is currently investigating the incident.