Challenges to deal with street vendors 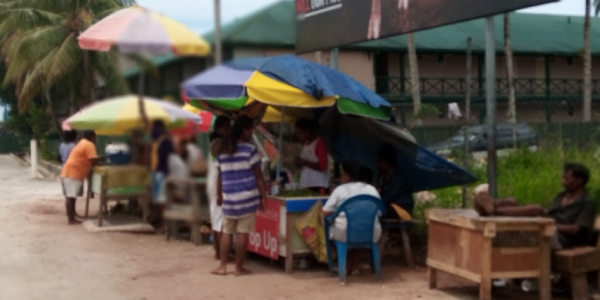 IMAGINE sitting all day throughout the week along the street to sell something just to make ends meet is a huge challenge.

It requires a lot of energy, time, patience, and dedication.

At the Western Provincial capital of Gizo, there are many betel nut vendors who are busy each day to generate an income by engaging in street vending.

With the growing number of illegal settlers moving into the urban centres from the villages, it creates a very challenging situation.

Majority of the betel nut sellers in Gizo are women of Nusabaruku village and others who live around the township.

Most of them have no jobs and they value the street sides as their office.

Vendors love the streets along the main Gizo town because that’s where most of their customers are moving around each day.

Streets in Gizo are normally busy as customers and public hustled around the township to shop.

And that’s what the vendors aim to capture-large numbers of customers.

According to the Gizo Town Council Town Clerk, Charles Kelly if the number of illegal settlements continue to increase, the unemployment gap will also rise.

He told the paper in an interview early this week that when it comes to doing business inside the town boundary, the council had been facing a lot of challenge for many years up until now.

Mr Kelly said, dealing with the betel nut vendors selling along the street is very challenging because they continue to ignore the laws.

He said, in this case, Gizo Market Vendors Association (GMVA) Committee has been set up to deal with the situation.

”However, it is the betel nut sector that is causing a lot of issues.

“Gizo Town Council only operates as an agency body under the Western Provincial Government (WPG) and so our duty is to look after the town, the properties and its citizens.

“The by-laws and rules under the Provincial Government Acts (PGA) has been established and people living within the town, the businesses, companies and islanders have to respect the rules being put in place,” he said.

He said, but it’s not an easy task to apply these rules to these vendors.

“After all selling betel nuts and cigarette smoking in a public space is illegal and strictly not allowed according to the market ordinances.”

He explained that hawking licenses is a certified document that allows you to sell any of your products and you cannot be arrested because of the licenses you have.

“In Honiara, some street vendors are buying the hawkering licenses.

“Unlike in Gizo, I think we still need to review some of our market bylaws and market ordinances which can re-activate some of the laws and policy that is more relevant and more applicable in today’s situation,” Kelly said.

He added, nothing much can be done, when selling of products along the street is the only last resort for these vendors’ survival.

“This is because they are unemployed and thats the only way to feed themselves and their families,” he said.

He added, above all keeping Gizo clean at all times, good hygiene from every vendors when operating their marketing is very important.

According to one of the vendors, selling of betel nut and cigarette is the most fastest way to generate an income each single day.

A mother of eight children from Nusabaruku said, they only survive through betel nut selling and cigarette apart from selling other produces including fishing.

She said, selling of betel nut and cigarette is very fast to earn money.

“Every day when we hit the good days, our takings can sometimes hit around $1000 or above.

“This is because of the location and the flow of the customers we get each day.

“Of course we have been warned and chased by the Town Council for not conducting our selves according the rules and laws regulated in the black and white paper.

“However, with all the money we get from selling the betel nut on the streets daily, we go back to our homes and feed our families , buy basic necessities and needs and, school fees for our children,” she added.

During the COVID -19 outbreak and the declaration of the State of Public Emergency (SOPE) many of the public gathering have been banned, gathering in market places disallowed and other social gatherings.

And this had affected many families and market vendors who were trying to earn an income to support their families.

Following the lifting of the SOPE, many vendors are now able to return and do business.

However, many vendors continue to defy the orders from the provincial authorities by selling along the streets which has been a cause of concern for the top officials.

Despite repeated warnings, many vendors continue to disobey the laws and still sell along the streets.

Western Provincial Secretary (PS) Jeffrey Wickham also highlighted the importance of Market Vendors Association to always abide by the laws given the GTC.

Wickham said, it is not only the market vendors alone but citizen of Gizo as whole to follow the rules.

“The main concern is the street vendors and the friendly environment we can offer, how clean and attractive it is when the international borders have reopened and travelers and tourist will again frequently visit our town.

“Gizo hosts the tourist most attractive destination across of the country due to its history and rich in culture and tourism activities.

“Therefore, these are things that we need to look at it and need to take into consideration,” Wickham said.

Town Clerk Kelly said, they have ordered all the betel nut vendors to relocate at the Banana Valley Satelite market but still they flooded back to the street up until today.

He said, it is very challenging to deal with human beings but it will be a lot easier if everyone work together.

Since all the betel nut vendors turned a deaf ear on GTC and WPG, nothing has changed.

Meanwhile, some members of the general public stated that there is also lack of support from some of the responsible authorities to enforce the rules and laws which can be effective to remove the vendors.