CHANGES IN THE OFFING FOR AUKI TOP COPS 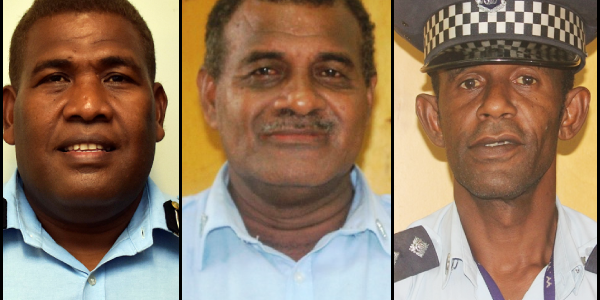 CHANGES in leadership are in the offing for the Royal Solomon Islands Police Force (RSIPF) in Malaita Province with the changing of the guards expected to take place in the next two to three weeks.

Solomon Star Auki has obtained information, which among others, said that three top cops serving in Malaita Province will be posted back to Honiara.

One, the former PPC Superintendent Stanley Riolo had already returned to Honiara as of late last year. He has since been promoted to the Supervising Assistant Commissioner (AC) Provincial.

The other two, Inspector Charles Eddie Koto who is the current acting PPC and Operational Commander Inspector Michael Ramosaea will join their colleagues in Honiara soon, according to information obtained by Solomon Star.

Both Insp Koto and Insp Ramosaea were already informed of their change of duty via email from Police Headquarters in Honiara this week. They would be moving back to Honiara.

It is understood that three new senior police officers will replace the outgoing officers. An announcement of the new appointments is expected to be made on or after 18th January when new promotions are due to be announced.

It is claimed that the recall of the senior police officers was politically motivated as Police Headquarters in Honiara is not on good terms with Auki police over the standoff between the MARA government and DCGA government.

Members of the Auki public had commended police for not using pressure which could fuel further violence after protesters took over the Malaita Provincial Chambers on 27th October 2021.

They claimed what happened in Honiara proved their point that when police used tear gas on protesters, the situation turned ugly resulting in the destruction of properties and shops in Honiara.

The protestors also argued that a similar situation could have occurred in Auki if police did not exercise restraint. They are concerned that Police Headquarters are recalling the three senior cops when they have established trust with members of the public.

In the meantime, Auki police have been hit hard with fuel shortage and lack of logistics support which continues to hinder police work in Malaita.

Commentators have it that those new senior officers who will be replacing the trio will still need support from Police Headquarters in Honiara and community leaders to ensure law and order is maintained in Malaita.

While the change in leadership in RSIPF in Malaita has been confirmed, it is argued that it is a normal part of the police operation to rotate senior police officers in leadership roles.