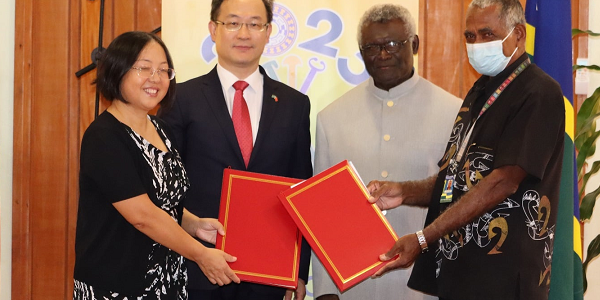 THE People’s Republic of China (PRC) has further injected another SB$172.4M to build the PG2023 modern Games Village at SINU to accommodate athletes and officials during the 2023 Pacific Games.

According to the signing agreement sealed yesterday, SINU will be the biggest beneficiary when the National Hosting Authority (NHA) handovers the facilities after the Games.

This will allow SINU to accommodate more students in modern accommodation facilities in the near future.

Sogavare said the project will be a win-win for the National Hosting Authority (NHA), SINU, the Tertiary students, the Solomon Islands Government and Peoples Republic of China (PRC).

“Thank you the Peoples of China for coming on board and agree to fund this project which will enhance the capacity of the National University of Solomon Islands, transform its image and provide ultra-modern facilities for our students to the level and quality of Hotel accommodation.

“Your Excellency it is extremely difficult for my Government to make such an investment to our own Institution, so I thank you most sincerely for gifting SINU and Solomon Islands this project.

“I would also like to thank SINU for recognizing this important opportunity to enhance your facilities, again that is visionary,” he said.

The signing between the Peoples Republic of China (PRC) and the Solomon Islands Government was held at the Prime Minister’s Office yesterday.

“Today marks another milestone for China-Solomon Islands relations, as we are here to witness the signing of Implementation Agreement of Solomon Islands National University Dormitory Buildings Project.

“The signing ceremony today is a concrete step to carry out the consensus reached by our leaders.

“Thank you Prime Minister for your strong leadership and strategic vision to our bilateral relations,” Ambassador Li Ming said.

Ambassador Li Ming revealed the project will comprise of three new 4-floor dormitories, one activity hall and one equipment house on SINU Kukum Campus. When finished, there will be altogether 216 dormitory rooms, which will accommodate more than 900 students.

Apart from that, all necessary furniture and sanitary facilities will be provided by the Chinese side, so the students will be able to move into their rooms directly.

The signing will be followed by the tender process for potential contractors for the project.

The signing was made possible following dialogues between the NHA, SINU and the Peoples Republic of China.

Instead of investing in low cost accommodation just for the Games, the NHA consulted SINU and the PRC and proposed a dormitory complex.

Not only will this dormitory complex be used as Games village during the Games, but one that has a lasting legacy of gifting to SINU and the people of Solomon Islands a modern dormitory complex that belongs to SINU for use.