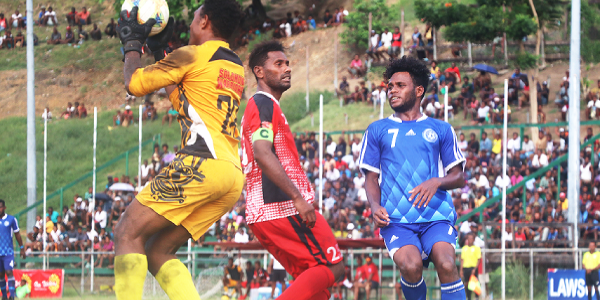 CENTRAL Coast FC is back at the top of the Telekom S-league (TSL) table with 25 points following their eighth win of the 2021/2022 TSL season at Lawson Tama, Sunday.

Coast edged past a determined Solomon Warriors side 1-0 to give them the lead three points ahead of Warriors and four points from third place holders Waneagu FC.

William Komasi’s sensational goal from a long range shot was the icing on the cake for Coast, who was pushed so hard to get a win after suffering their first defeat to Waneagu FC two weeks ago.

Both teams were determined to come out victorious.

Despite a series of chances, neither side could find the back of the net, finishing off the first half scoreless.

Solomon Warriors campaign to maintain the top spot was left in doubt after Jerry Donga received a red card in the second half.

Central Coast’s defender, Komasi was on target again for Coast, sending a powerful shot from the edge of the box to the far top corner, out of Warriors custodian’s reach for the winning goal.

Warriors are back on the second spot with 22 points, Waneagu FC on third with 21 points and Henderson Eels fourth with 19 points.

KOSSA moved up one place to the ninth spot with nine points.