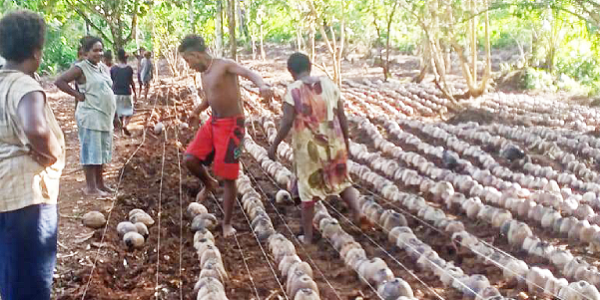 COCONUT farmers in West Kwaio are excited to see the expansion and implementation of coconut rehabilitation project in West Kwaio constituency.

The project is initiated by Ward 28 Youth Council through support of Member of Parliament for West Kwaio Constituency Hon. Claudios Tei’ifi.

Report reaching this paper said the project implementation team in West Kwaio had already set up three nursery sites at Busi’i in Ward 28, Foubaba/Siubongi in Ward 27 and Ngaringa for Ward 26.

It added that these nursery sites can cater for 30,000 nuts which will be distributed to farmers when they are ready.

It further added that the initiative was support by the constituency and farmers who wish to see rehabilitation of coconut industries which their past generations have been benefited from.

A spoke person in Ward 27 said the coconut nursery at Foubaba is the first project implemented by the parliament member for West Kwaio constituency.

He said the nursery site at Foubaba is expected to cater for 10,000 nuts which will be distributed to farmers.

He proudly said women, youths and children were excited to engage in the project to rehabilitation coconut plantation in the constituency.

This paper understands that coconut rehabilitation project in West Kwaio was started in 2021. The Project was initiated by Ward 28 youth council.