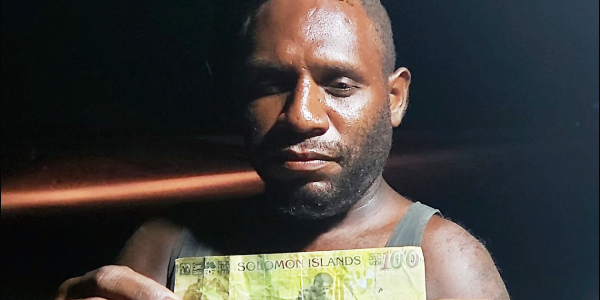 A LOCAL road-side coconut vendor, Charlie Isuna is the latest victim to the false $100 bank note which is circulating in the country.

Mr Isuna, who sells green coconuts for a living was tricked by one of his customers last Tuesday, at the Henderson 9-1 area.

He was in tears when he discovered that the bank note was fake.

The coconut vendor said it was a sad experience because this is not the first time a road-side vendor fell victim in such an incident.

“I was told, other vendors have also been tricked in the past.

“Now it is happening to me,” he said.

The father of two children said this has to stop.

“Such dishonest practiced must end now.

“We are hardworking individuals trying our best to provide for our families. We are trying to earn a living,” Isuna added.

He said he further regretted all his money that he gave to the buyer as his change from the coconuts he bought.

Isuna also called on customers to respect all struggling market vendors, because such will not do any good to anyone.