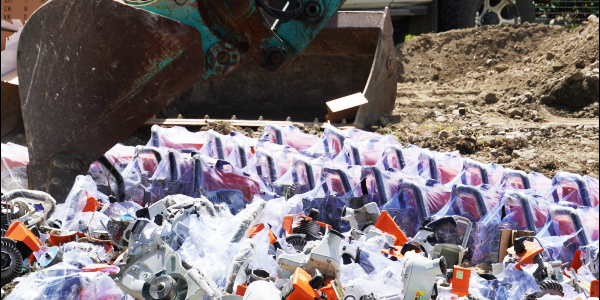 A HALF a million dollars worth of counterfeit 070 Stihl chainsaws have been destroyed at GBR, on Tuesday by Customs and the Discount Auto Parts, the genuine dealer of Stihl brand in the country.

Discount Auto Parts Operation Manager, Sarah Bouro revealed that a total of 60 counterfeit Stihl chainsaws were seized by Customs, and 59 pieces were destroyed, and one piece is kept for future reference and training purposes.

It was revealed that the importer of the counterfeit chainsaws was an Asian.

The fake chainsaws were imported into the country in 2021.

Upon the consignments arrival last year, Customs officers conducted robust checking mechanisms at our borders. In this instance, Stihl have registered their trademarks in this country to protect their brand name and reputation for high quality manufacture of their products.

Therefore, a cross-check by the Customs officers with the Discount Auto Parts had confirmed that the chainsaws were counterfeits.

The chainsaws which were destined for distribution to the provinces have been detained, while the matter is further dealt with by the Customs Investigations unit, the officer said.

He said from the past years, Customs officers have found an increasing number of restricted and prohibited goods.

This has resulted in detentions and seizures of vehicles, food items and cigarettes.

According to the Organisation for Economic Co-operation and Development, industries world-wide have lost large amounts to counterfeiters. These losses not only affect the producers of genuine items, but they also involve social costs.

The ultimate victims of unfair competition are the consumers. They receive poor-quality goods at an excessive price and are sometimes exposed to health and safety dangers, and also the Governments lose out on unpaid tax and incur large costs in enforcing intellectual property rights.