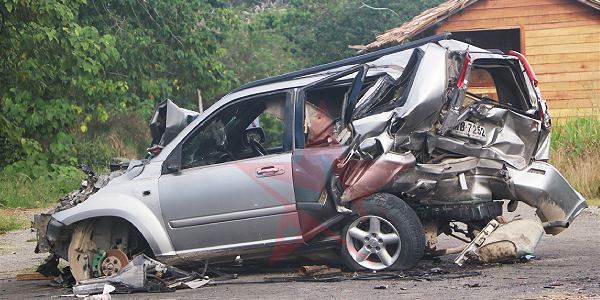 A YOUNG driver who crashed into a group of people at Tenaru Bridge last July killing five of them has had his jail term increased to 15 years.

His sentence was increased after the Office of the Director of Public Prosecutions (ODPP) appealed his sentence of six and a half years in prison, saying it was manifestly inadequate.

President of the Court of Appeal, Justice Edwin Peter Goldsborough last Friday when delivering Court of Appeal judgments via virtual court yesterday said they are satisfied a sentence of 15 years imprisonment correctly reflects the criminality of offending in this case.

“In the circumstances, we allow the appeal as it relates to the ground that the sentence imposed of six and a half years was manifestly inadequate,” he said.

Justice Goldsborough added that the orders to have the time spent in pre-trial custody is to be deducted from the total sentence imposed of 15 years, should not be disturbed.

“We direct that the sentence is to be effective from the date he was taken into custody,” he said.

The sentencing judge had imposed a starting point of seven years imprisonment.

The judge then after consider the aggravating and mitigating factors in this case arrived at a final sentence of six and a half years in prison for each of the manslaughter sentence.

Those sentences were further ordered to run concurrently.

But Justice Goldsborough said the seriousness of offending in the circumstances of this case in their considered view should place it well in the upper range of sentences to be imposed.

He said while the sentencing judge was correct in saying the starting point of seven years was in the upper range that is still below the range of sentences for manslaughter that should reflect the criminality in offending in this particular instance.

Justice Goldsborough said there are many factors that made Benson’s case serious and that are, he ignored direction to stop, he ignored his co-passenger’s advice to pull over and stop several times, he ignored police’s instructions to stop, he drove at excessive speed, he ignored heavy traffic conditions and he failed to give way to an oncoming vehicle at Tenaru Bridge and he was under the influence of liquor.

The Court of Appeal judges also note the offence occurred at night time when there was very heavy traffic on the road and five lives were lost as consequence of his extreme reckless driving.

“From start to finish, it was not only reckless, but deliberate and intentional behavior, which resulted in the terrible tragedy of the loss of five innocent lives that night.

“The courts have a duty to send out a clear message of deterrence to the community that those who commit this type of offences can expect an immediate and lengthy custodial sentence to be imposed.”

Justice Goldsborough said they formed the view that the starting point of 7 years is manifestly inadequate and were satisfied it should be 21 years imprisonment.

Having considering the mitigating factors including the reconciliation and compensation paid, they arrived at a final sentence of 15 years in prison for each of the manslaughter charge.

Those sentences were ordered to run concurrently and effective to start from the date he was taken into custody.

Benson 19 years old when drove a land cruiser on the night of the offence, 7 July 2021.

He was spotted by the Police Patrol Team for careless driving when he took off from KGVI cross road at about 8pm to 9pm.

Police followed him and gave signs for him to stop but he continued on at a very high speed.

Along the road from Lee Kwok Kuen to Lunnga area, he met a traffic jam and tried to escape from police by driving through the middle of the single lane road without indicating lights to other vehicles on the road.

His passenger told him to slow down and stop on the side of the road but he told the passenger to shut up and wind the windows up.

He continued to drive at a very high speed until prior to entering the Tenaru bridge, an oncoming vehicle entered the one way bridge from the Eastern end.

In an attempt to escape from the police vehicle that was behind him he veered the vehicle he was driving towards the old bridge.

At that time, a fundraising was held on the western end of the old bridge and there were spectators packed at the fundraising activity.

As Benson veered onto the entrance of the old bridge he turned off the vehicle headlights making it difficult for him to see anything in front of him.

In the process, he hit and killed five people.

Benson escaped but was arrested shortly.