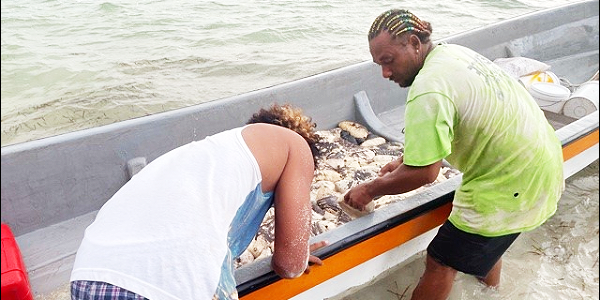 WHILE the people of Honiara and the rest of the country are worried about the corona virus protocols such as social distancing and wearing of  masks, the outlying Atolls of  Malaita Outer Islands (MOI) are worried about neither.

Thanks in no small part to Ontong Java’s very own medical doctor, Reginald Aipia.

Dr. Aipia, now credited with saving the entire 6, 000-plus population of Ontong Java was on Luaniua the day the government falsely announced that nearby Pelau was the entry source of the deadly virus into the country on 10th January this year.

Prime Minister Manasseh Sogavare later retracted the statement, but never publicly apologised to the 1,000-plus people on Pelau.

Dr. Aipia later said that if he had not been there when the virus struck, half the population on Luaniua would have gone. Luaniua has an estimated population of three and a half thousand people.

“Just imagine, there were no masks, there were no social distancing order, there was nothing at the time. We could all have been wiped out,” he said.

“In the first week, I hardly had a sleep having to treat up to 30 people each night in the early days of the outbreak. Sometimes the people of Pelau sent tranport to take me there. It was devastating,” he said.

The simple anti-common cold drug which he used is Restocin. He also followed it up with an anti-biotic which he does not want to disclose.

Daily, the people now move about their villages maskless. Nor are they worried about the spread of the deadly disease, because they know they have received the best treatment,” Dr. Aipia said.

“Everyday is bechedemer harvesting day for us,. The people are happy and are enjoying what they always do best – harvesting bechedemer,” a proud Dr. Aipia said.

“The deaths were not covid-related. One died due to hypertension (high blood pressure) which she had suffered since 2005. She was 75 years old,” Dr. Aipia said.

“It was a tragic case but it is not covid-related. The man who released the information to the media is not a medical doctor and should keep his hands off,” Dr. Aipia said.

“All I can say is that we are enjoying life out here without the need to wear face masks or to engage in social distancing,” he said.

Dr. Aipia has also thanked the owner of the vessel Solomon Prestige 2 which transported food and medicine to Ontong Java.

“It was very kind and thoughtful of them. They brought food and that is something the people here lacked since the lock down and curfews. Medicine too was in urgent need. My supply of medication which I brought with me in December has been used up. But now, I have been fully replensihed. I wish to thank the owner and operator of Solomon Prestige 2.

“They have done the people of Ontong Java an invaluable service. The Patrol Boat Gizo which came last week from Honiara never brought anything by way of food and medicine. Sometimes, one wonders why they came at all,” Dr. Aipia said.