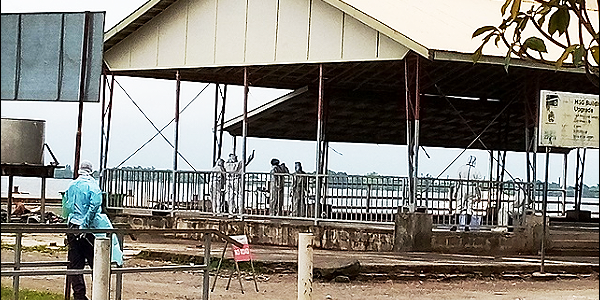 CREW members of two landing crafts that arrived in Gizo, Western Province early this week have been swabbed.
A team from the Western Provincial Health Authority carried out the swabbing exercise.
The vessels arrived but were denied permission to berth at the wharf until swabs were collected and results known.
The two vessels are LC Plus One and LC Ocean Grace.
The swabbing tests were conducted at the MSG Building.
Therefore, members of the general public in Gizo are not allowed into secured premises.
According to the Western Provincial Health Emergency Oversight Committee (PHOEC) Chairman and Director acting Western Provincial Health and Medical Services, (WPHMS) Dr. Michael Belande Buin, swabs from the crews have been collected and to be tested.
Once the results are ready, it would be released to the public.
Meanwhile, a team of five medical front liners have left Gizo on Tuesday bound for Rukutu, Marovo to do swabbing and contact tracing.
Rukutu has been declared an epi-centre of the virus spread in Marovo following exposure fortnight ago by crews of the LC Nusa Tupe who tested positive for COVID-19.
Four of the high risk zones, namely Gizo, Noro, Munda and Marovo are in lockdown.