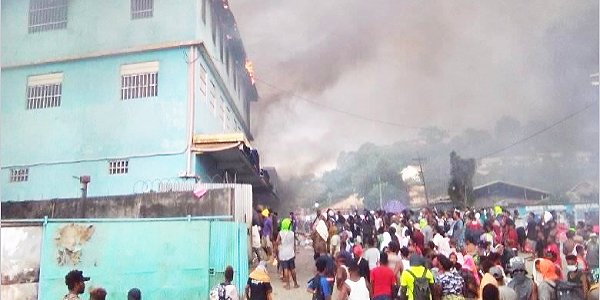 THE Democratic Coalition Government for Advancement (DCGA) has expressed sadness following the destruction to business houses in Honiara in recent days.

A statement from DCGA early this week said the destruction of businesses are done by unlawful and heartless people with selfish agendas.

The statement said the instigators of the recent looting and arson that gripped Honiara have no respect for our multi-diverse ethnic groupings.

“The looters and rioters destroy and victimize the innocent residents and business houses of Honiara,” the statement said.

The statement said the Government is aware of reports that the instigators are planning another evil plan to completely decimate the whole of Honiara city before implementing the next phase which they call the “third wave” including the declaration of Malaita as an independent state.

It says some of the ring leaders are openly stating on Facebook that “in order to build a new house, the old house must be first destroyed.

“Such statements are not helping the volatile situation we are currently experiencing in Honiara,” the DCGA statement said.

“To the peace loving and right minded Malaitan’s, we should ask ourselves whether we are comfortable with the violent advocators to lead our people to an independent state.”

Nevertheless, the statement says the national government is encouraged by the wisdom of the majority of our citizens not to employ violence, looting or threatening tactics to impose one’s evil plan of decimating Honiara city, the capital of Solomon Islands.

“It is even beyond comprehension and brevity to see the violence and disrespect the instigators demonstrated against the peace loving people of this beloved country of ours,” the statement added.

The DCGA statement said resorting to violence will never bring about peaceful solutions but disaster upon oneself.

The statement adds the DCGA government sees that the majority of our people are not supportive of the ongoing unlawful events and thanked good citizens to continue to remain law-abiding citizens of this country.

Meanwhile, the national government also thanked our Churches for urging their followers to refrain from unlawful gatherings and events and such call must continue to be reemphasized to our good people.

“Instigators are strongly urged to encourage their violent supporters to embrace similar pathways from the provincial governments of Choiseul and Western provinces if they want to democratically replace the national leadership,” it said.

The statement also urged all our peace loving citizens irrespective of our ideological disagreements to resolve our differences within the bounds of our laws.

“Solomon Islands belongs to all of us and to all nine provinces in the country. There is a democratic process to elect and oust a duly elected Prime Minister and that is at the floor or Parliament and not through violence, looting and destruction,” the statement said.