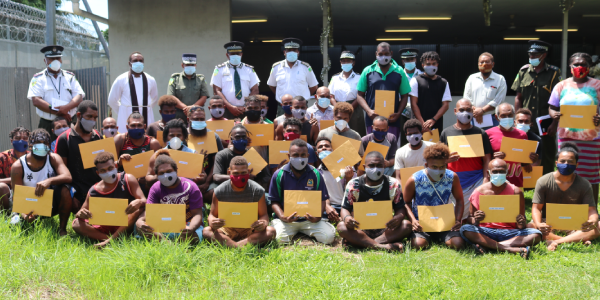 STRICT release conditions were applied for parolees and inmates who were given early release last week.

Commissioner of Correctional Services Solomon Islands Gabriel Manelusi said these parolees and early release inmates must comply and abide by their condition of release.

A total of three parolees and 65 inmates were given early release last week due to the COVID-19 situation in the country and the overcrowding situation within the country’s correctional centres.

Mr Manelusi said the condition of release for parolees and early release inmates are;

He said the early release order for the 65 inmates was given due to the current COVID-19 situation in the country.

Therefore, he said they must be released to comply with all COVID-19 government, health and medical orders and instructions that applied to all citizens of Solomon Islands.

These 65 inmates were recommended for Early Release in accordance with the Correctional Service Act and Regulations 2007 -2008, in particular Regulation 198.

The three parolees release was granted by the Parole Board meeting held towards end of last year (2021) after they fulfil all their requirements. Their release was endorsed by the Minister of Police (MPNSCS) Anthony Veke after receiving instruction from the Attorney General’s Chamber.

A thanksgiving service was held for the parolees and 35 early release inmates from the Rove Central Correctional Centre in Honiara at Saint Paul’s Chapel on Friday last week.

The other early release inmates are from Tetere, Gizo, Auki and Lata Correctional Centres.

Mr Manelusi took the opportunity after the service to remind them of the three sources of law to help shape their lives after their release.

These three sources of law are; the Divine Law, the Customary Law and the Constitution Law.

“God has his own way and purpose for you on your release today – a history for the country Solomon Islands because you are created by him and an asset for our country to help grow the economy of our nation Solomon Islands,” the Commissioner said.