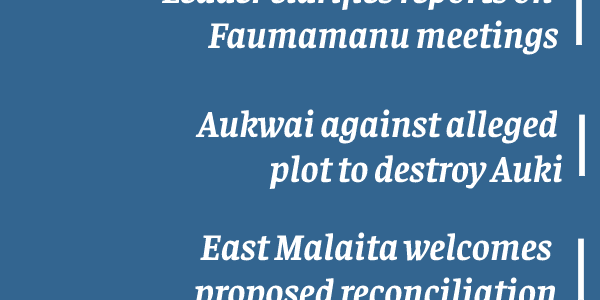 AN East Kwara’ae leader, Samson Kwasi has called on the M4D-MARA leaders, associates and journalists to be mindful of publishing false and fabricated information on Facebook and the Print Media to stir public resentment and causing further divisions among Malaitans.

A published statement by the East Malaita Watch page on Facebook has quoted Mr Kwasi, stating that the call was made following the false publications on Facebook and Solomon Star alleging that Deputy Prime Minister, Manasseh Maelanga was holding meetings at Faumamanu.

It was reported that the meetings was to plan an attack on M4D-MARA, Security Force Barrack at Kwaibala and the burning of the Auki Township.

“Such false and fabricated publications will only bring the standing of M4D-MARA into disrepute, losing respect of Malaitans who should be throwing supporting behind movement to gaining certain levels of Autonomy and or Independence for Malaita (where possible).

Kwasi further stated that Auki-Township has nothing to do with the interrogation and the unlawful confinement of the three East Malaitans to warrant a retaliation (as alleged) to burning Business Houses in and around Auki.

He said the actions of the M4D-MARA Security Force were in no way lawful as Police is the only sanctioned authority to confine and interrogate any person believed to have committed an offence punishable by law.

“For any unsanctioned Security Force to take on and over the sanctioned duties and responsibility of RSIPF is something highly questionable and indeed had set in motion a very dangerous path for Malaita as an Independent State, in the making.”

Kwasi said the role of law and order maintenance in the public is a sacred duty of the Royal Solomon Islands Police Force as enshrined in the Constitution of Solomon Islands.

“This sacred duty is government by laws and regulations that ensures effective law and order enforcement that protects the enforcers themselves.

“The enforcers of law are protected by law to do what is necessary to individuals in society that are breaking the law and in turn the general public respects that as well with clear conscience and humility as a citizen of the nation who are expected to be law-abiding,” he added.

In the meantime, Kwasi called on both parties to continue with the negotiations that has been established to resolve the parties’ differences in a timely manner so as to afford further escalating the issue.

HENRY Aukwai, one of the trio who was interrogated and unlawfully confined by alleged security force of Malaita province few weeks ago has rebutted false claims that they will retaliate and destroy Auki township.

This was revealed in a statement over the weekend.

Aukwai said that the 20 M4D-MARA Security Force who executed the planned attack on him and his two colleagues did not even own a single roadside table market in Auki Town, let alone a house or a Business in Auki Township so as any plan retaliation will target.

“Auki is situated in the Kwara’ae Territory and is the pride of the land owning Kwara’aens in Malaita Province and it was majority of the Kwara’aens that owned properties which house tax paying businesses in Auki that contributed to the Provincial Government’s basket and the National Government’s Revenue.”

He added, for people to say that East Malaitans will retaliate to burning down Auki Township is totally nonsense, and false.

Aukwai said we are now in the 21st Century hence the “Main-Man Attitude” that was portrayed by the M4D-MARA Security Force must be stopped if we are truly concerned about the development affairs of Malaita Province!

“Other than that we are heading Nose-Dive into the wrong path; a path to anarchy as opposed to the much talked about Democracy chorus that M4D-MARA has been singing in the last three years.

“Talking about being the ‘Main-Man’, I have been there, done that, and nothing positive we be gained from such an attitude instead we are causing problems for ourselves,” he concluded.

THE Leaders of East Malaita and the Trio of the recent Auki Violent interrogation and unlawful confinement have welcomed an invitation for the proposed Customary Reconciliation by M4D-MARA leaders.

Whilst agreeing to the invitation, Medley Kwalemanu said that Malaita’s Traditions and Cultural Practices does not and in any way borders on making speculations and continuous fabricated lies on Facebook to advance Political Agendas.

Mr Kwalemanu is one of the three East Malaitans who were interrogated and unlawfully confined by local a Security Force.

He said that whilst it is correct to say that Malaita’s Cultural Practices and Traditions obliges the three M4D-MARA Leaders to take the first step in asking for customary reconciliation, it is also a matter of Common Sense.

“Common Sense will always dictate that a person who caused trouble is duty bound to the lead in cleaning up the mess and division caused and is not the other way round,” Kwalemanu said.

The three East Malaitans revealed that at the time of the interrogation, the Security Force personals openly declared to them that they were acting on orders and instructions from their Bosses referring to Suidani, Celsus and Knoxley to execute the attack.

However, Celsus yesterday denied his involvement.

“I do not order anyone to carry out any orders to do any evil acts.

“I am just an ordinary citizen. Some people are good at creating false stories,” said Celsus.

Meanwhile, it was understood that whilst negotiations are underway between the concerned parties, the trio of the recent attack in Auki have identified persons who attacked them.

“They are contemplating laying formal complaints for unlawful confinement with Police Prosecution Team,” a statement from the trio said.