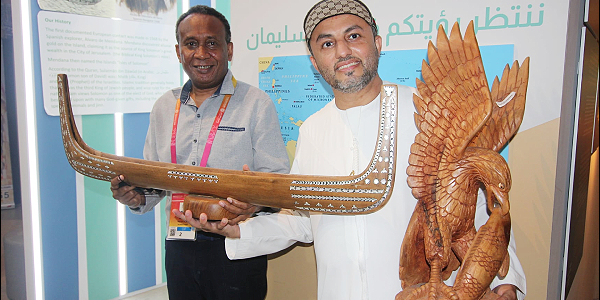 United Arab Emirates (UAE) national Mr Ahmed Tarak Al Mansouri from the Emirate of Abu Dhabi visited the Solomon Islands Pavilion for the first time Thursday this week and was attracted to the various handicrafts on display.

After a brief introduction including the history of how the Solomon Islands was named, Mr Al Mansouri decided to purchase one of the last Eagle carvings remaining including a replica of a ‘Tomoko’, the War Canoe of the Western Province.

Mr Mansouri has promised to preserve the carvings in memory of his first visit to the Expo 2020 Pavilion named after their greatest Prophet or Nabi Sulaimān ibn Dāwūd or King Solomon the son of King David as referred to in the Holy Bible.