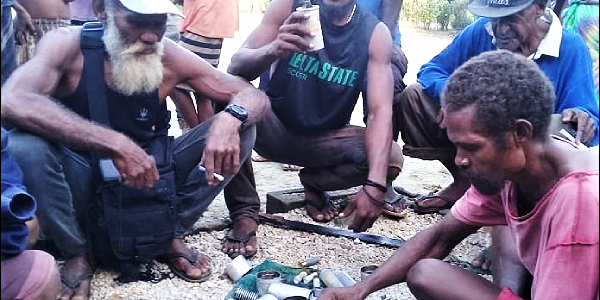 PEOPLE of Bethel community in East Fataleka, Malaita Province got a shock of their lives after an early morning raid on Thursday by members of Police Response Team (PRT) to hunt down the Malaita for Democracy (M4D) President Knoxly Atu.

Initial report reaching the paper claimed during the surprising raid PRT used excessive force and weapons which scared the villagers.

Information further claimed that about 20 PRT officers entered the community and fired tear-gas at households waking up children, women, elderly people and the entire community while they were still sleeping.

The incident occurred at around 4am yesterday morning.

The raid caused fear, panic, and confusion to community members as it was carried out under the cover of darkness.

It’s the first time for the community to experience such incident leaving many in trauma.

The community reacted to what they termed as an unprovoked and surprise attack by trying to defend their community from being further attacked and chased police away before they could arrest the wanted M4D President.

He said police should have entered a peaceful dialogue with the community rather than using arms, intimidation, and force on innocent people in an unarmed community like Bethel.

He then questioned where is the police community engagement which police have been articulating when all they did was resolving to raid using guns and teargas.

He further claimed the raid had caused trauma to women and children who are now living in fear and distress as a result of the raid.

“An elderly man and his grandson almost lost their lives in the attack when PRT directly fired teargas into their bed while they were still sleeping causing them to suffocate.

“They were lucky to survive the attack,” he added.

He said the unprovoked attack on his community is so provoking that villagers regrouped while still under attack and fought back causing PRT to withdraw.

He said PRT and villagers fought for over 15km until daybreak and said police used teargas, guns, and other weapons to shoot at villagers while villagers used traditional weapons to defend themselves from the danger.

He said following the incident community members have now lost their trust in police.

In the process, he said police have left behind live ammunition and retreated back further East in a police fast craft and four outboard motors.

Mr. Atu said it is sad to know that some of their fellow Fataleka men have also been involved.

He said those involved have no respect for women and children of the Bethel community.

While Bethel community leaders said they are open for police dialogue, he said he was surprised that police did not make any attempts for a peaceful dialogue to have his brother handed over for questioning.

This paper received confirmation that two PRT officers were injured in the clash with community members who stand their ground to defend their community.

Attempts to get comments from Malaita Provincial Police Commander regarding this incident yesterday were unsuccessful.