Farmers reaping the fruits of their labour 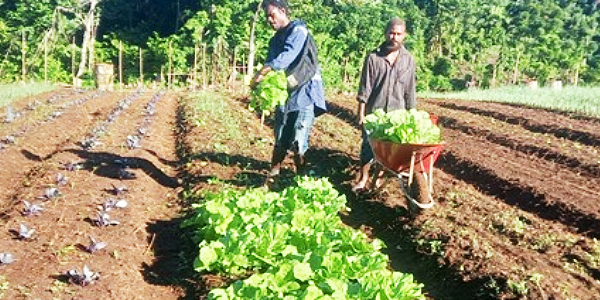 FARMERS at Mabulu farming have started reaping from varieties of vegetables that were planted a month ago.

They are now selling their first harvest as well do home delivery to interested buyers as of last week.

In an interview with this paper on Monday, Sales and Marketing rep Timothy Maeli said they have now started to sell their first harvest of this year.

Mr Maeli said the main idea of venturing into farming is to prepare for the 2023 South Pacific Games.

He said at this time of difficulties it would be good for more locals’ venture into farming because the end result of it will both benefit our country and ourselves.

He said farming is often deemed a “national security” priority by countries as those products are necessary for existing, whereas most manufacturing items are not as essential—hence, demand for these items is often linked to consumer sentiment.

Further to that, he said farming can continuously support both of the farmers and the country.

“Therefore it would be good if the government step in to support local farmers financially so that many farmers can get better benefits from them to improve the economy of the country and their livelihoods,” he said.

On the other hand, he said the Mabulu farming was also having their own difficulties to sell vegetables to local markets, while they have not yet had their own market to work for that issue.