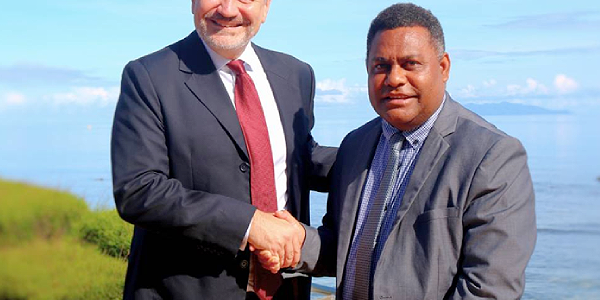 FULL-SCALE execution of the Millennium Challenge Corporation (MCC) Threshold Programme is set to proceed next year with the arrival of the programme’s Solomon Islands in-country Director, Charles Jakosa.

MCC is an independent United Sates Government foreign aid agency, which signed the SBD $165-million grant agreement with MNPDC in January this year.

The signing formalised the partnership between SIG and MCC. The partnership aims to encourage sustainable development and alleviate poverty through two project components, the Forest Value Enhancement Project (FoVEP) and the Accessing Land for Tourism Investment Facilitation (ALTIF) Project.

The Ministry of National Planning and Development Coordination (MNPDC) was appointed as MCC’s primary counterpart on behalf of the National Government (Solomon Islands Government) on the SBD $165 million grant aimed at supporting it reduce poverty and increase economic growth in the country.

MNPDC said Mr Jakosa will bring a great variety of development experience to the position.

“He has led implementation and has been a technical expert for efforts supported by the US Department of State, United States Agency for International Development (USAID), Australian Department of Foreign Affairs and Trade (DFAT), the United Kingdom, Canada and several multilateral organisations.

“He recently served in Ukraine with the US State Department as a Senior Anti-Corruption Advisor and before that as Chief of Party for USAID’s Promoting Peace and Justice project in Bangladesh.

MNPDC said Mr Jakosa is a lawyer by profession, starting his career through the provision of legal aid to developmentally-disabled Native American children.

It said Mr Jakosa also served as a public defender prior to becoming a US Department of Justice attorney where he worked on resource and land tenure issues for Native American tribes in the US. He later worked to bring human rights cases against police departments.

MNPDC said Mr Jakosa’s posting in Honiara expands the presence of the US Mission in Solomon Islands. The posting is part of the US Government’s commitment to the Solomon Islands after the Secretary of State, Antony Blinken’s announcement that the US will be opening an embassy in Honiara.

Meanwhile, it said a kick-off workshop for the SIG – MCC Threshold programme has been scheduled for Tuesday to Thursday next week in Honiara for the full implementation of the programme.