Government gives 320K to National Team as token of appreciation 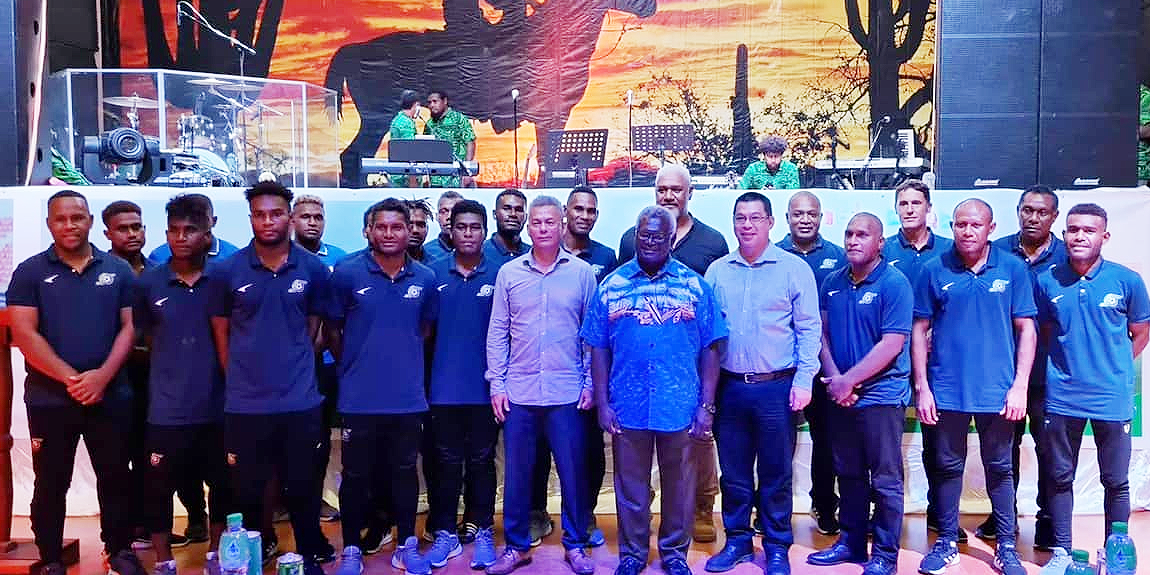 SIFF: The DCGA government through the Ministry of Home Affairs gives a token of appreciation of $10,000 dollars each individual and a sum of $320,000 to the Solomon Islands national team delegation to the recent FIFA World Cup Oceania Qualifiers in Qatar.

The money was presented to the team during the Office of the Prime Minister dinner for the national team last night at Cowboys Grill in Honiara.

Prime Minister Manasseh Sogavare in his official remarks said the token of appreciation is given to the team by the government on behalf of the people of the Solomon Islands for uniting our people through football during a challenging period for the country.

“I am very pleased to be here in person to say thank you for flying our beloved flag in Qatar. Thank you for restoring pride and promoting unity in our country through soccer and at that time when the country went through unprecedented challenge,” he said.

“You were the glue that held the country together. When you played that night every Solomon Islanders that have television glued their eyes to the television, we were united at least for a moment for hours during the match as the boys united our country.

“So, soccer is a uniting force that brings unity and peace to the hearts of Solomon islanders regardless of the differences we have. Thank you for allowing yourselves to be vessels that neutered national unity through sports.”.

PM Sogavare stressed that it was a remarkable run for a young team that has a bright future despite the defeat to favorites New Zealand in the final.

“Thousands of Solomon Islands and people around the world followed the tournament and watched the great final between you and New Zealand,” PM Sogavare stressed.

“It was a momentous occasion for the nation and of course football in our country but more importantly it was an experience and achievement for all of you individual players.

“You are a young team and I have great faith in you that you will continue to represent our beloved country and people with unwavering commitment and pride. I am excited about what you can achieve and what the future holds for you”.

The PM also lauds both the players and officials for being good ambassadors of the country and flying the national flag on the world stage.

“On behalf of the people and government of Solomon Islands I thank you all for being good ambassadors of our country and representing as well in Qatar in the FIFA World Cup qualifying games.

“Let me express my sincere appreciation to the management and officials of the national soccer team and our head coach. I acknowledge the stewardship of the team officials who ensured our boys performed extremely well during the tournament.”, PM added.

Solomon Islands has never won a gold medal at the Pacific Games in football and PM Sogavare is confident the new generation of players have what it takes to end the drought on home soil when the country hosts the games next year. He also highlighted his government’s commitment to developing sporting infrastructure for youths in sports ahead of the Pacific Games 2023.

“I’m confident that the future of our national soccer team is in very good and capable hands and I trust you will continue to provide guidance to our heroes as they continue to do our country proud.

“My government is dedicated to supporting youth in sports in Solomon Islands. Our dedication is reflected in our investment in sporting infrastructures for the future of our youthful populations. The 2023 Pacific Games is a direct investment into the future of this country. I look forward to the Pacific Games 2023 when the national team wins gold,” he said in his closing remarks confidently.

SIFF President William Lai acknowledges the government and Prime Minister for appreciating the national team’s performances at the World Cup qualifiers and the continued support of football in the country.

“Thank you, Prime Minister Manasseh Sogavare and the government, for continuing to support football and for this first of its kind to appreciate our national team after a major tournament,” he said.

President Lai stated that before his term in office ends next year he is trying to build a strong foundation for football in the future and he used the national team as an example.

“I am going to leave the presidency post in July next year but I want to leave a strong foundation for the future. Our team is the youngest in the tournament in Qatar and last year we decided to change the team because we are looking into the future.

“Looking at the Pacific Games gold medal we have aspired to achieve it for so long but we haven’t been there and on home turf, I believe we should get the gold medal.

“We have the momentum and I believe in the coaching team that we are going forward. Once we win the gold medal, we will challenge to qualify for our first World Cup in 2026. Solomon Islanders we always dream but the many of the dreams is just fantasy and let me assure you that by the foundation of this team, players, coaches, and all Solomon islanders we should work together to believe that it is no longer a fantasy but an achievable goal for Solomon Islands.”

Solomon Islands coach Felipe Vega-Arango gives credit to his players and officials for making the country proud in the recent World Cup qualifiers. The Spaniard also thanks the government, SIFF, and other stakeholders for supporting the national team who are good ambassadors for the country both on and off the pitch.
“The boys didn’t only represent Solomon Islands on the field but also outside the field. Amazingly, everybody in Qatar was amazed by how professional they were and how they behaved in the hotel.

“I’ve been coaching for 25 years and I have to say that this group was the best behaving group I’ve coached in my life. The only thing that I would like to say to them is to be smart and try to do something positive with their life, it is what it is.”

Coach Felipe also shared the same sentiments as the PM and SIFF president about the ambition to win the ultimate target on home soil in the Pacific Games 2023. He urged the players to continue working hard and believe in the dream to win gold next year.

Hon. Bradley Tovosia also handed $15,000 to the vice-captain Joses Nawo on behalf of his people of East Guadalcanal and as a crazy football fan.

The national team also presented a signed jersey to the Prime Minister at the end of the program last night at Cowboys Grill.

Also attending the event were other government ministers, guests from stakeholders of football, and SIFF representatives.