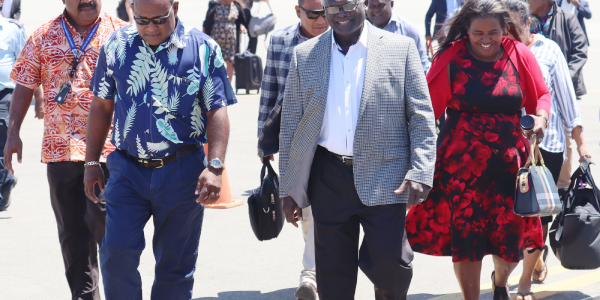 SOLOMON STAR has obtained documents relating to the cost of Prime Minister Manasseh Sogavare’s delegation to the recent United Nations General Assembly (UNGA) in New York and who helped pay the $2.5 million bill.

Details of the costs and composition of the 19-member delegation were contained in an internal Memorandum addressed to the Permanent Secretary of the Ministry of Finance and Treasury and the Accountant General.

It shows the delegation was split into two groups – 12 funded by OPMC and seven (7) by members’ respective Ministries, according to the document.

Interestingly, the South Pacific Forum Fisheries Agency (SPFFA) has stepped in, picking up “the total costs for airfares and per diems” for the 12 members from the Office of Prime Minister and Cabinet (OPMC) on the UNGA delegation list, the document shows.

Total funding support from FFA was $1.56 million. This means the government would only meet accommodation costs averaging USD500 a night per person, according to the document.

Solomon Star has obtained a copy of the Memo headed, Approval for the Budget of the OPMC members of the UNGA Delegation.

“The full delegation to UNGA is nineteen (19) people as (shown in the) table below. Twelve are funded under OPMC and seven (7) under their respective ministries,” it said.

“With regards the delegation under OPMC, FFA has agreed to meet the total costs for airfares and per diems.

Regional organizations usually pays a much higher per diem [allowances] based on UN rates.

“SIG will only meet the cost for accommodations, and other provisions including hosting of official dinners, transit and local transportation costs and gifts,” Dr. Rodgers said in the Memo.

The OPMC delegation members funded by the FFA are:

MEMBERS OF THE UNGA DELEGATION FUNDED UNDER OPMC

According to the Memo the accommodation cost per room per night averaged USD500.

“The accommodation cost is averaged at USD500 per room per night for all locations [Brisbane, New York, Washington, and Singapore]. There are variations in costs between locations but overall, it will balance, and any unspent balance will be retired,” the Memo said.

Other delegation members funded by their own Ministries are:

Some have questioned the cost of accommodation for the delegation and whether double dipping is going on.

According to some who are familiar with the UNGA, the costs of accommodations for at least three officials including the head of delegation is usually met by the United Nations.

“The same would apply to the Washington DC sector of the trip. Given that the meeting in Washington DC was at the invitation of President Biden, the US would be responsible for the cost,” adding this should be included in the budget.

Asked whether it was aware of the cost of the UNGA trip, the Opposition has confirmed it is fully aware of these documents.