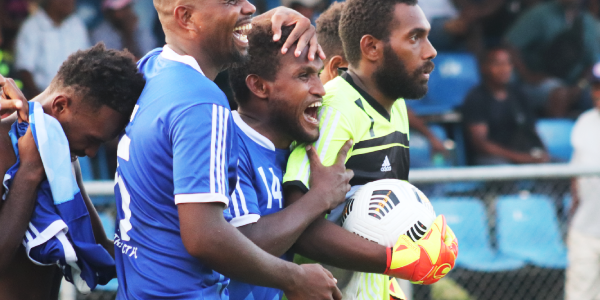 Coast won against a well organized Solomon Warriors FC side 4-2 on penalty shootouts after both teams were locked on a 2-2 draw at full time.

Coast Coach Jacob Moli is impressed with his young side’s performance, especially the attitude of never giving up.

“It was a tough match, we had to come from behind twice but I’m happy with how the players stick to the game plan though time was catching up on us.

“I told the players prior to the match that we have to play until the final whistle, it’s a 90mins game so be patient, and they did just that, all efforts paid off in the end,” he said.

Central Coast was forced to come from behind twice to level the score against the experienced Warriors side.

Warriors scored their first goal three minutes from the start, leaving Coast to fight hard all throughout the remaining of the first half and into the second half before substitute Clifford Fafale scored the equalizer.

Both teams went into extra time and Warriors regain lead again but not for long before Fafale had his name on the score sheet again to make it 2-2.