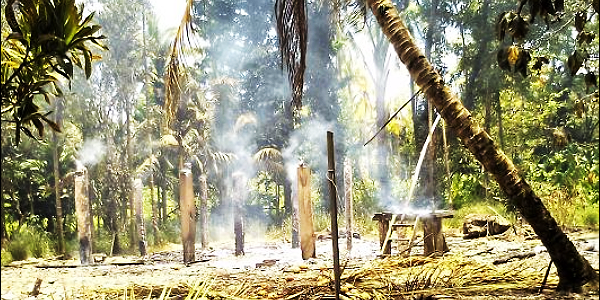 TENSIONS remain high in the Baegu Asifola electorate in Malaita Province as three dwelling homes were torched to the ground at Ato village in what was regarded as a retaliation attack in relation to a murder incident two years ago.

Eye witnesses told Solomon Star Auki that the burning incident took place at Ato village at around 11am on Monday 7 March 2022.

It was revealed a group of men from Fataleka near the Baegu Asifola and Fataleka border arrived in two outboard motors (OBMs) to collect compensation demand from families of three men who believed to have been involved in the murder incident two years prior.

The three are currently serving their jail terms for manslaughter in relation to the murder incident.

Information obtained claimed families of those three men offered 20 shell money as peace money to the family of the victim back in 2020.

Relatives of the victim then demanded an additional compensation of 30 shell money from the family of the three men recently.

Upon their arrival to collect the compensation of 30 shell money, relatives of the victim realized that only two families were willing to pay a total of 25 shell money as compensation, while one family did not live up to the demand.

The compensation payment was five shell money short of the 30 shell money demanded which angered relatives of the deceased.

They identified the house of the family that fail pay up their compensation demand and torched their living house, kitchen, and boys’ house resulting in the family losing all their belongings in the fire.

This paper was informed that while the trio who were involved in the murder incident are currently serving their jail terms, relatives of the victim had collected 20 shell money as peace money and 25 shell money as compensation totaling up to 45 shell money.

Information reaching Solomon Star Auki stated that the situation is still tense as relatives of the deceased threatened to return to Ato community anytime soon.

Informers told this paper that the situation could further escalate if it is not handled properly.

They said police presence is needed at Ato to stop further escalation of the issue.

One informer told this paper that it was lucky that the attack at Ato was carried out while the village was empty with the owner of the house away.

The murder incident occurred two years ago. On Wednesday 5 June 2020, the lifeless body of a young boy was discovered floating between Ato village and Ata’a.

The young boy in his 20s was believed to have been brutally murdered and thrown at sea in Baegu Asifola electorate in Malaita Province at that time.

The brutal murder incident shocked the people of Baegu Asifola and Fataleka constituency.

Information received stated that the boy was murdered near Ato village and was dumped at sea before it was discovered by fishermen near Mangonia, a reef area between Ato and Ataa.

The body of the deceased was discovered on Wednesday morning 5 June 2020.

The body of the deceased was then taken to Ata’a clinic where relatives of the deceased quickly identified the deceased as Kenneth Aufiu hailed from Adaliua and Sadiana community in the neighboring Fataleka constituency.

Police arrested three suspects in relation to the death of Mr.Aufiu the next day.

One of the suspects whose family failed to comply with the compensation demand had their living house, kitchen, and boys’ house touched to the ground by angry relatives of the deceased on Monday this week when they came to collect compensation demand.