HONIARA BEGINS CLEAN UP UNDER THE WATCHFUL EYE OF FOREIGN TROOPS 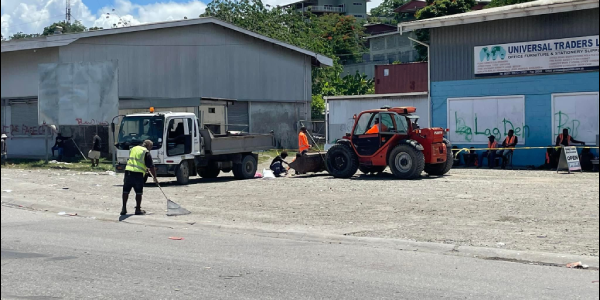 HONIARA – the city of some 160, 000 residents who have been subjected to rioting, looting and destruction of properties in the last three days – is undergoing a major cleanup under the watchful eye of foreign troops and police.

The arrival of Australian soldiers and police, along with troops from Papua New Guinea over the past two days have restored a degree of normalcy and a welcome reprieve in the senseless looting and burning of buildings and shops,

The clean-up which began in earnest overnight concentrated in areas that suffered the worst, including Ranadi in the east and Chinatown to the west, where shops and other buildings were looted before they were set on fire.

Heavy equipment are being used to remove roofs that have caved in while debris on the roads from the Lunga area to Chinatown are being removed.

Many people spoken to said last night was the quietest in three days as local police, helped by their counterparts from Australia kept their eye for looters who kept coming back especially to Chinatown, which suffered the heaviest in terms of looting and destruction.

Shops that escaped the fury of the rioters remain closed. Honiara’s main market is also closed. At Point Cruz, the central business district, there are long queues outside the only fuel station that remains open and Bank South Pacific (BSP) ATMs at the main branch in downtown Honiara.

BSP is also a casualty in the uprising. Rioters burned down its branch at Ranadi on Thursday evening along with Island Enterprise just down the road. The company is one of the oldest.

Local companies were not spared. TIMOL for example was razed to the ground. Owner Nannette Tutua was devastated as what it took the family years to build had simply vanished in the fire in minutes.

One local radio station, ZFM has reported that three dead bodies had been recovered in burn-out buildings at Chinatown. This could not be independently verified. If it is true, this would be the first casualties of the extensive damage caused by looting and burning.

Despite this, a number of service outlets, including the National Referral Hospital and the Honiara City Council clinic at Rove remain open

Bulkshop, which operates a number of outlets throughout the city said its Rove shop would remain open until the 7pm-6am curfew announced on Friday afternoon.

Meanwhile Government Members of Parliament who resigned the DCGA Government and OUR Party are reportedly reconsidering their resignations.

At the last count, at least five MPs, including a government minister have tendered their resignations.

But a government backbench and former Minister said those who resigned were considering revoking their resignations in the coming days, adding the presence of foreign troops have helped quieten things down.

Those who resigned are the MP for Malaita Outer Islands (MOI), Martin Mokolo Kealoe, the MP for West New Georgia, Silas Tausinga and the MP for East Kwaio, Stanley Festus Sofu who told about 200 East Kwaio voters on Friday of his intention to resign.

They have since been joined by North Malaita MP, Senley Levi Filualea, whose resignation letter was published on social media last night. Hon Filualea is the Minister of Agriculture and Livestock.

Central Kwara’ae’s Jackson Fiulaua was said to be considering resigning but there was no independent confirmation. He is the Deputy Chairman of Government Caucus.

Former Town Clerk, Rence Sore, last night appealed to the two MPs from Vella Lavella to resign from OUR Party and the DCGA Government.