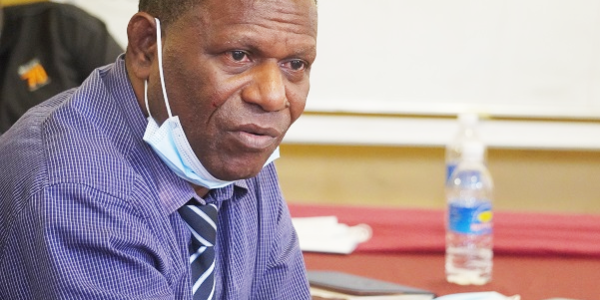 Guadalcanal Province to allocate lands at Mamara for sister provinces for investment, etc

GUADALCANAL Provincial Government (GPG) will allocate a piece of land each to all the nine provinces at Mamara in Northwest Guadalcanal.

This is to allow all provinces to do investment there, achieve national unity, build friendship and boost provincial revenue.

The GPG delegation led by Deputy Premier (DP) Lazarus Alfred Rina arrived in Gizo on Tuesday for a brief visit.

Speaking during the discussion at the Provincial chamber, Mr Rina formally announced that Guadalcanal Province will provide a piece of land to all its sister provinces to allow development to take place at the proposed site.

He said this proposal was agreed to by GPG and land has been allocated already.

“Under this deal every province will be allowed to come up with a proposed plan for investment at the proposed site in Mamara.

“This initiative will help in revenue exchange and sharing.

“At the same the exchange of business activities and employment can also take place at the site.

“By having investment and business activities on the proposed site will also benefit the surrounding communities and market vendors,” he said.

DP Rina added by having different provinces working together in one place will help to achieve national unity.

“The goal is to bring us together and benefit us in many ways like inter- marriage and allow development to take place.”

For now, what that needs to be done is for the provinces to make their submissions on what investment they wish to undertake at the allocated land.

In response, the Western Province Government expressed excitement over the news and invitation.

“It is indeed a great news that Guadalcanal Province has already allocated a piece of land for its sister provinces to allow important investment and development to occur in their province for the first time.”

Mr. Talasasa said this will bring everyone together to do investment and participate in development.

He said, it’s important for Western Province to prepare and make a proposal submission to determine what sort of investment it will mundertake.

“By having major development in infrastructure and facilities in one place will bring so much benefit to all the provinces including Guadalcanal Province.

“This will add value to the land that will be used for development,” he said.

Premier of Western Province Christian Mesepitu thanked GPG for the initiative saying it will help other provinces to achieve their dream to do investment on Guadalcanal Province and benefit all the provinces.

The sister relationship between WPG and GPG started many years ago.

And in their past discussions WPG has offered to allocate a piece of land for Guadalcanal Province to invest in the province.

And GPG has shown great interest to invest in Noro town.

Discussion on the type of investment is also ongoing.