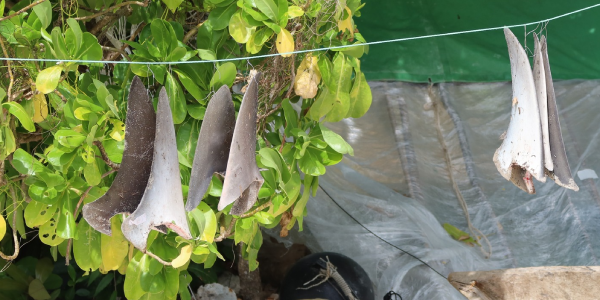 A TEAM consisting of Wildlife Conservation Society and the Ministry of Fisheries and Marine Resources (MFMR) are inspecting Vonavona Lagoon following complaints of increasing shark fishing.

A statement from the Wildlife Conservation Society (WCS) and MFMR said the inspection was in direct response to concerns raised by lagoon fisherwomen who have reported an increase in shark and turtle fishing activities in Vonavona Lagoon by outsiders.

During a visit to a fishing campsite, the team confirmed that shark finning operation was evident.

“Shark carcases with their fins removed were observed scattered along the beach of the island.

“Shark fins were observed hanging out to dry,” the statement said.

The team also found that within the shallow waters next to the campsite several live sharks were hooked and attached to wire lines that were tethered to trees on land.

The sharks remain attached to the wire lines until it was time to remove their fins.

However, the statement said despite these findings, none of the individuals involved in catching the sharks were present on the island at the time of the visit.

The matter is now being further investigated by our MFMR Compliance Team in Noro.