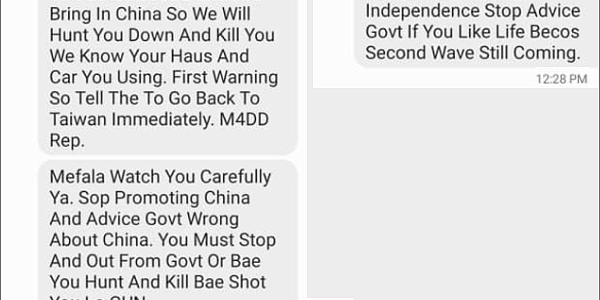 INSTIGATORS of the recent rioting, looting and burning in Honiara, appear to have changed their tactics by threatening to “kill” key government workers suspected of openly supporting the diplomatic switch to Beijing in 2019.

And the stamp on the threat to shoot to kill is from none other than the M4D – the armed group being blamed for leading the rioting, looting and burning in Honiara last week

The threats were even posted on the social media overnight. Above is a typical one, which among other things confused Taiwan with the People’s Republic of China (PRC).

The man who made the post two days ago (Thursday 2nd December) identified himself as an M4D Rep.

The threat warned “stop advising government if you like life because Second Wave still coming.”

Below is what threat said – translated in English.

“We know you are the one that is advising the government about China. So we will hunt you down and kill you. We know your house and the car you are using. First warning, Tell the government to go back to Taiwan (recognise Taiwan again) M4D Rep”

“We are watching you carefully. Stop promoting China and advise the government wrongly about China. You must stop and leave the government (DCGA), or we will hunt and shoot you with a gun”

“Stop what you are doing and support Malaita independence. Stop advising the government if you want to be alive because the second wave is coming.”