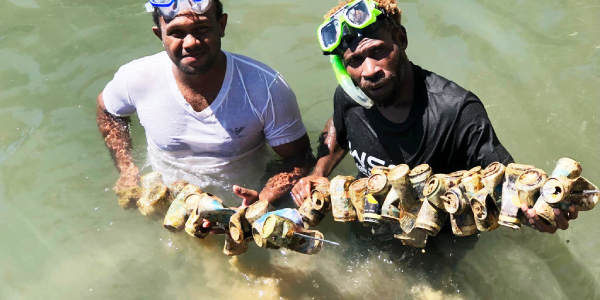 A NUMBER of organizations have successful engaged in the annual International Coastal Clean-up Day 2022 over the weekend.

The annual event is coordinated by the International Coastal Clean-up Association (ICCA) where volunteers from around the world collect trash and debris from coastal and marine habitats.

In the country separate clean-ups were held in Honiara and Gizo.

In Honiara, Solomon Airlines, Travel Solomons, Visit Solomon Islands, the Ministry of Fisheries, and Ministry of Environment have teamed up with the Kakabona community in East Honiara on Saturday morning for the clean-up exercise.

A statement from Solomon Airlines said, about 50 volunteers assembled to first hear an educational talk by the Unit of Environment and Conservation, Ministry of Fisheries and Marine Resources, and Tourism Solomons, and to hear suggestions from the Kakabona community.

Following the talks they all walked along the beach front together to clean-up the region between Eden Bay to Lela Beach.

During the clean-up exercise a number of trash and rubbish were collected.

Recyclable plastics were also separated and will be provided to our partners Nufuels to convert into usable fuel for household use.

In Gizo, Western Province Dive Gizo and members of the Western Solomons Surf Association have teamed up to clean the PT I09 and Dive Gizo seafront where many cans and other trash were collected.

Divers have also been engaged to collect the tones of trash that have lying under the ocean and littered the seafront.

More team work was expected to be conducted yesterday initiated by Positive Change for Marine Life community in Gizo, it was revealed.

ICCA explained that this event is an annual event that encourages people to come together and help clean up our oceans.

This year’s event took place in more than 190 countries around the world.

It is a day where citizens from all around the world normally come together to clean-up the coastlines and waterways.

The coastal clean-up day came into existence more than 30 years ago.

It was founded by Linda Maraniss and Kathy O’Hara, both of whom worked at the Ocean Conservancy, a non-profit environmental agency that specializes in formulating resolutions and policies at federal and governmental levels.

The ICCA works with partners to organize local cleanups in countries around the world. In some cases, organized cleanups are conducted as part of larger campaigns like Plastic Free September or World Oceans Day.

Other times, local clean-ups are simply a way for people to get involved and help improve their local environment.

The goal of the ICCA is to reduce the amount of plastic and other waste that ends up in our oceans.

By collecting trash and debris from coastal and marine habitats, we can help to make a difference.

The next event will be held next year.