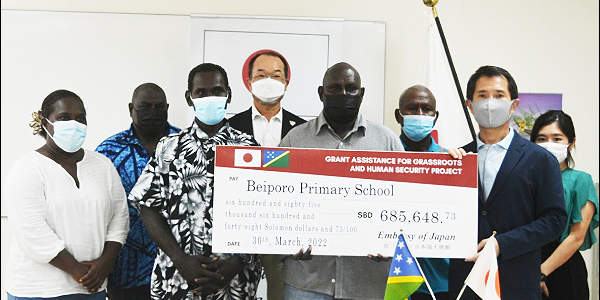 THE Government and people of Japan has support Beiporo Primary School on Vella La Vella, Western Province with a grant support of $686,000 for the construction of a classroom building.

A signing ceremony to seal the deal was signed on Wednesday in Honiara.

Witnessing the grant signing were representatives from the Beiporo Primary School and officials of the Japanese Embassy.

“We will support building of new classroom for Beiporo primary school. The total amount of grant assistance reaches about SBD$686,000. This assistance will enable the school to provide appropriate educational environment to students,” Mr. Yoshida said.

He explained one of the priority areas of their assistance under the Grassroots and Human Security Scheme is supporting basic education.

“Education plays a key role in development of the society and the country,” Mr. Yoshida said.

He added education gives a great deal of support and encourages to each and every individual and it opens doors of bright future for children.

“Solomon Islands is still a young country with a lot of children with many dreams.

“Therefore, we believe that this project will have positive impacts on the socio-economic development of Solomon Islands. And hopefully it will strengthen further cordial relationship between Solomon Islands and Japan,” Mr. Yoshida said.

He emphasized one important point of this project, is participation and contribution of communities.

“The communities should be the moving force of the project. With the commitment of the communities, we are confident that the project will be successfully and smoothly carried out and reach the ultimate goal.

“I sincerely hope that this project will be remembered as a symbol of the friendship between the people of Japan and Solomon Islands in the years to come,” Mr. Yoshida said.

Apart from the grant assistance the Embassy of Japan also donated 5 boxes of face masks that contain 3,000 face masks in each boxes to Beiporo Primary School and Community.

Meanwhile, Head Teacher of Beiporo Primary Robson Apusae on behalf of the school and community of Beiporo thanked the government and people of Japan through the grassroots program for responding to and accepting their application for supporting their children’s education.

“The project will really a benefit to help our children having a good learning environment.

“Provide job opportunity for our local skilled people and at the same time our children will have a better conducive learning environment,” Mr. Apusae said.

Thus, he said the community has pledged to support and complete the project on time.