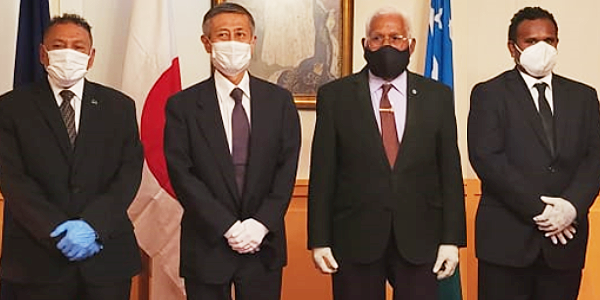 His Excellency MIWA Yoshiaki, Japan’s Ambassador Extraordinary and Plenipotentiary to Solomon Islands has officially presented his letter of credence and letter of recall for his predecessor H.E MORIMOTO Yasuhiro to His Excellency the Governor General this morning at the Government House.

His Excellency at the ceremony affirms his determination to fulfill his important missions and duties to further promote and expand the bilateral relationship between Japan and Solomon Islands.

Japan has been a key donor and partner in supporting Solomon Islands with Socio –economic and Infrastructural development over the years.

The Areas of Cooperation and assistance between the two countries also extends to Health (Volunteer program), education and more recently ocean governance.

In response, His Excellency, the Governor General assures Ambassador MIWA of Solomon Islands readiness and commitment to support the Ambassador and his Embassy to fulfil and implement his mandate in office.

Ambassador MIWA is a seasoned diplomat and has been previously posted in Iraq, Finland and Philippines being the most recent before being appointed as the new Diplomatic representative to Solomon Islands.