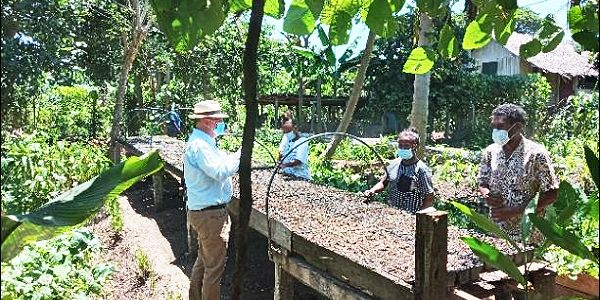 Kastom Gaden Association (KGA) officially launched one of its projects for this year called PIRAS which stands for Pacific Islands Rural and Agriculture Stimulus Facility on Friday the 18th of March.

At the launching, KGA had the opportunity to host Australian High Commissioner to Solomon Islands, Dr Lachlan Strahan and Permanent Secretary of Ministry of Agriculture and Livestock (MAL) Ethel Francis who were able to launch the PIRAS project at KGA’s Office at Burns Creek, East Honiara.

Joining via Zoom at the launching, KGA acknowledged and appreciated their main donor partners of PIRAS: International Fund for Agriculture Development (IFAD) and Department of Foreign Affairs and Trade (DFAT) and Pacific Islands Farmers Organisation Network (PIFON) for implementing the Project.

At the launching Australian High Commissioner Dr Lachlan said that “farmers in every society perform an important role and are the backbone of any country.”

KGA acknowledged the Government of Australia for its continious to support Solomon Islands.

PIRAS Project in the Pacific Islands supports economic recovery from COVID 19, through food security, nutrition and income generation for rural communities, including Solomon Islands, and is targeting women and youths.

PIRAS project is implemented by Pacific Islands Farmers Organisation Network (PIFON) and KGA is fortunate to be the Local implementer here in the Solomon Islands.

Currently, PIRAS project is working closely with 3 Provinces: Central Province, Western Province and Choiseul Province, from these 3 Provinces, 10 sites have been established already and its coordinators and communities are working on the grounds to carry out and complete its activities with the support of KGA Staffs and the whole PIRAS Team.

KGA extended its gratitude to the MAL PS for the assurance that the ministry will provide support in every way to make sure that PIRAS Project is successful and her ministry will continue to carry on the implementation of the project.

PIRAS project team Solomon Islands would like to thank the 10 communities who accepted project implementation in their communities and assures that even though COVID -19 is a hindrance, it does not stop activities to continue.

An official from PIFON also delivered a speech on behalf of PIFON.

Sakiusa delivered a statement on behalf of IFAD.

According to Mr Sakiusa, the project is surely the continuation of the partnership between Solomon Is Government. Australia and IFAD which started with the Solomon is Rural Development Project I.

PS Ethel during her keynote address acknowledged Australia and IFADs support to the project and hope that the project would closely work with the MAL staff in the implementation of the project.