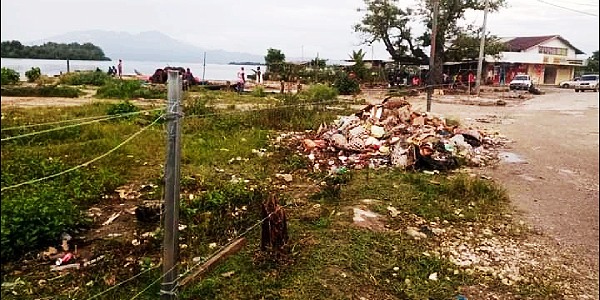 THE famous area near the Buni tree at KHY area in Gizo, Western Province is now sealed off from the public.

The area was a popular spot for betel-nut vendors from around the islands to congregate and sell their supplies.

However, on Saturday Gizo Police fenced off the area and declared it a “no-go-zone”.

This was in response to the Western Provincial Government’s ban on betel-nut sales along the streets of Gizo in light of COVID-19 community transmission in Gizo Town.

Gizo is declared one of the emergency zones in the province following COVID-19 outbreak in parts of the province.

Despite the ban and efforts of Gizo Town Council and the police, betel-nut vendors continue selling at KHY area.

Over the weekend Gizo Police secured the area by placing a fence around the area.

A notice was placed advising people not to use the site.

These include practicing of social distancing, wearing of face masks, no large gatherings and banning of betel nut selling in public spaces.

“Already some of these given instructions have been neglected and ignored by our very own people,” PDOC Chairman Jeffrey Wickham said.

Mr Wickham said by breaking the laws these people are risking their lives to protect themselves against the virus that is slowly creeping into communities.

A member of the public and Gizo resident also shared his concern about the ignorance of betel nut vendors.

“They should listen to the provincial government and the responsible authorities,” he said.

The Gizo resident, who refused to be named, said many of these betel vendors survive through selling of betel nuts along the road and in any public space.

“In these challenging times, let’s be mindful, always listen to the responsible authorities for instructions for our own safety.

“There’s nothing wrong if you sell betel nut in your homes because customers will always come and buy them,” he said.

He said it is important to practice the simple rule of wearing masks, hand sanitiser and social distancing.

“This is to minimize the risks of catching the virus that can destroy our lives if we do not prepare,” he added.