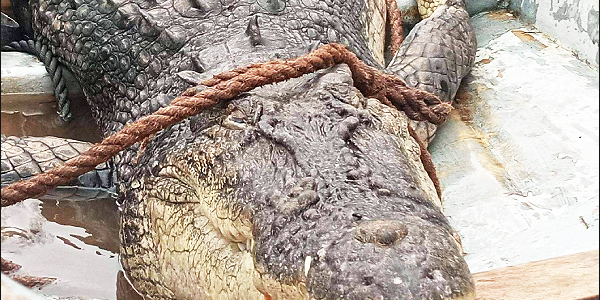 A 14 FEET (ft) killer crocodile was slaughtered last Wednesday by villagers of Sibilando, Vella La Vella in Western province in a revenge for the death of a father of two children.

According to a report reaching Solomon Star Gizo, the father was out diving on Monday night but did not return the next day.

It stated that when the man’s family did not see him return on the expected time, a search was then conducted.

“When the news of the missing man was heard, everyone in the village already knew it was a crocodile attack.

“So a search was conducted by the villagers. The intention of the search was to locate and kill the crocodile,” one informant said.

It was on Tuesday that the killer crocodile was spotted. But an attempt to execute it had failed.

On Wednesday, the villagers finally seized the crocodile and slaughtered it.

They then cut open the killer and found some remains of the deceased inside its stomach.

According to a Nurse and Associate Health Director for Seventh Day Adventist (SDA) Mission based in Kukudu, the scene that day was very tragic and shocking to the villagers.

Franklyn Julius said it was him who ordered the villagers to cut open the killer crocodile.

“I was on my way to Jones Adventist College (JAC) in North Vella when I was caught up in the incident.

“After we have retrieved some body parts of the deceased, including his arm, we took them to Karaka Clinic.

“The man’s remains were then handed over to his family for proper burial,” Julius said.

The deceased father is survived by his wife and two daughters.