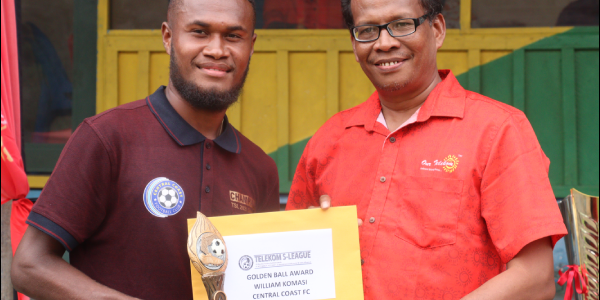 Young Komasi received his award during the prize presentation ceremony of the TSL 2021-2022 Season at the Lawson Tama Stadium, Thursday.

Komasi won the top award after a careful screening of all players from the 12 participating teams in the league.

In an interview with Star Sports, Komasi said he was glad to have received the award.

“I was very glad indeed to be awarded the player of the season award.

“Indeed during our matches in this season, I’ve been trying all my best to perform in a standard that is exceptional. Receiving this award has proven my hard work and determination as a footballer,” he said.

He added, the award has given him more confidence and challenge to train harder to compete again in the new TSL season.

With the award now under his belt, Komasi said all credit must go back to where its due.

“I would like to thank my coaches for the encouragements.

“You have helped me to push myself towards the edge with a lot of efforts and hard work invested in this sport.

“Throughout all our matches, you have inspired all of us players to must win games and to become champions of the TSL – the country’s top tier league,” Komasi concluded.