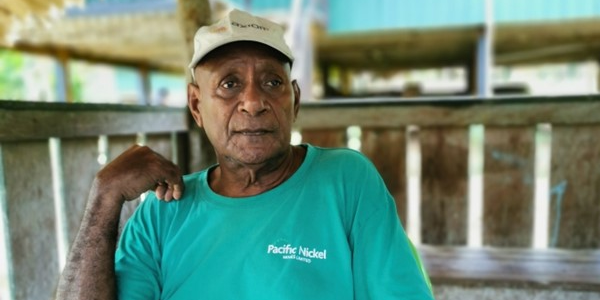 I have always wanted an opportunity to speak to key landowners on Isabel on a face-to-face interview on Isabel itself rather than third parties.

My intention was made known to at least two of the companies engaged in the prospecting phase of mining there. Pacific Nickel Mines Ltd provided that opportunity last Friday.

It was 7:30 in the morning when Pacific Nickel’s speed craft left Honiara for Kolosori on West Bogutu. There were nine of us on the steel haul craft, powered by two Yamaha engines of 200hp each.

There was no pre-designed script for my assignment. In a way, I was thrown at a deep end and told to swim or sink. I decided to swim.

In other words, I had to find the people to interview, establish their bona fides and so on.

At 9:30 – exactly two hours after leaving Honiara – we arrived at Havihua Village – a quiet hamlet situated on the east side of the famous Thousand Ships Bay. To the north is the tenement that Pacific Nickel had been prospecting in search of the rich nickel deposit there.

Father Wilson Mapuru comes to mind. He was quoted extensively in a previous assignment I had sent one of our reporters under my charge to undertake. Eddie Lachlan’s assignment focused more on photographing Pacific Nickel’s camp and drill sites.

Soon after our party settled down at Havihua Village’s rest house, Fr. Mapuru arrived. We spoke briefly. Thereafter, he decided it was better to speak privately at his own residence, which is located at the end of the village.

Before long we sat down in a leaf house which he uses for meetings and entertaining visitors.

“I’ve read so many of your articles but I never got to see you face to face until today,” he began our interview.

“Yes, I have written extensively on many issues,” I told him, adding that my trip here was to find out the support or otherwise for the mining companies vying to extract the rich nickel deposit on Isabel.

“If you support company X, why, if not, why not?

Fr. Mapuru began by explaining his tribal roots and clans and their claim of ownership of the land where Pacific Nickel Mines Ltd operates a large tenement. He brought two maps showing the boundary.

“In terms of compliance with government regulations on mining, Pacific Nickel Mines Ltd is the best. The Company did everything right in terms of compliance. It is the first company that I have across to have done so,” the former qualified marine officer told me.

“And this is a good thing. The company has set a standard, which must be encouraged,” Fr. Mapuru who once worked with Axiom, an Australian company which had lost its licence because of a dispute with the national government.

The good thing about Pacific Nickel Mines Ltd’s compliance is that it helps discourage the issue of corruption, he said.

“At a time when even members of the corporate world are racing to get what they want at any cost, they could be forced to cut corners. And cutting corners means the potential for paying bribes is real,” he said.

“So my tribe and clan have given our support to Pacific Nickel Mines Ltd in what they are doing here. Of course there areas for improvement but I am sure the company will come to deliver on their undertakings when the time comes,” Fr. Mapuru said.

One area which remains his dream is to see an Area Health Centre or Mini Hospital built at Midoru – a few kilometres east of Havihua Village.

“That’s my dream. Our women and children have and continue to suffer because there is no such facility nearby. They have to travel long distances to get help in terms of medical attention.

“I hope the company will give this a priority or the government even,” he said.

“They must be open with us. The Company must not be afraid in developing a closure working relationship with us. We have done our part by clearing all the past hurdles so that the company can operate without unnecessary disputes.

“Furthermore, we are a responsible people and we cannot abuse our integrity by asking for things unnecessarily,” he said.

Pacific Nickel Mines Ltd is believed to have won a Mining Licence for the Kolosori tenement and will soon begin developing the multi-million project.

A company spokesman said landowners have a 20 per cent stake in the Company so not only 40 per cent of the royalty’s amount will be paid to the trustees’ account but additionally it is estimated that from the second year after the operation starts they will become beneficiary of a further 20 per cent of the Company’s profit.

“Therefore, the project is certain to transform Isabel Province as well as the nation economically,” the spokesman said.