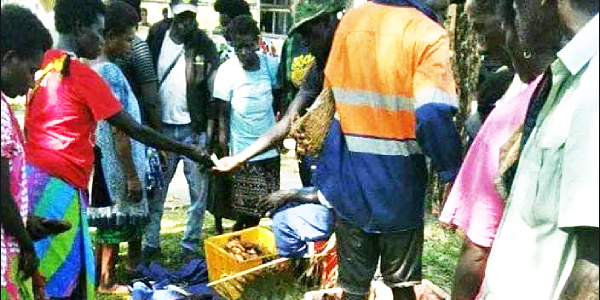 AFTER months of non-access to Buin Market in Bougainville, Papua New Guinea (PNG), local residents of Shortland Islands have now returned through the border to sell their produces and do shopping again.

This is the first crossing that the people of Shortland have made to Bougainville, to do their marketing at the Buin market and then conduct their shopping and headed back to their respective villages.

Reports reaching this paper yesterday said, the neighboring brothers from Solomon Islands are now doing their market for the first time since the pandemic and the closure of the Border between Shortlands Islands and Bougainville.

Speaking to Solomon Star Gizo yesterday, Chief from Toumoa Village, Shortlands Islands, John Alisae said there are a number of fishermen from Shortland islands that crossed over to Bougainville to sell freshly caught fish at the Buin Market.

Chief Alisae said these people have been left out and the Government of Solomon Islands and their MPAs are not taking responsibilities to at least give some assistance throughout the pandemic.

He said it is understood, Shortlands Islands do host some important areas such as the Border security base, but the access to service and livelihood for people is missing out.

“These people have no option but to cross over to Buin Market to sell their produces. This is the only way that allows them to buy goods from the shops and later traveled back by boat to Shortland Islands,’’ he said.

However Bougainville Police Service early last week also issued directions to stop the people from Shortland Islands from Crossing over into Bougainville.

According the reports from the NBC Bougainville News, the Chief of the Bougainville Police Service, Deputy Commissioner Francis Tokura said directions have been to the Southern Command to halt any movements from the border between Shortland Islands and Bougainville.

The NBC Bougainville news stated that Mr. Tokura has sent instructions to Buin Police Officers not to allow the crossing.

‘’Even the Maritime border between the Solomon Islands and Bougainvillle is still closed since the COVID-19 pandemic,’’ he said.

‘’Even worst there are also some unsolved cases of COVID-19 in Shortlands and the recent beating of Orava Sari fishermen,’’ Mr. Tokura.

Meanwhile there are also rumors and confusion circulated in some parts of Shortland Islands and Buin town that the border is now open.

Thursdays and Saturdays are busy market days in Buin market.

Shortland lies in the extreme northwest of the Solomon Islands and is much closer to the southeast edge of Bougainville.